Getlink - Return to growth and strong first half of 2022

Yann Leriche, Getlink CEO said: “In the first half of the year, we achieved very encouraging results, driven by the return of passenger traffic, the effects of our customer focused strategy and operational excellence, and the commercial launch of ElecLink. However, uncertainties linked to the evolution of both geopolitical and health events require us to remain prudent.”

The Group’s operating expenses increased by €37 million for the half year. For the Eurotunnel business, operating expenses were up 20% to €214 million reflecting the impact of the recovery in activity, as well as the increase in energy costs.

First half consolidated EBITDA of €309 million benefited from the commercial launch of ElecLink.

Net finance costs increased by €62 million for the first six months of 2022, mainly because of the effects of higher inflation rates in the UK and France on the cost of the indexed tranche of the debt.

The Group’s consolidated net result for the first six months of 2022 was a profit of €52 million.

The unsettled general context does not affect the solidity or the long-term competitive advantages, including environmental ones, of the Group or those of its various activities, nor their medium and long-term growth potential.

The Group confirms its determination to continue to improve its financial, operational and environmental performance by capturing the opportunities offered by constantly changing markets. 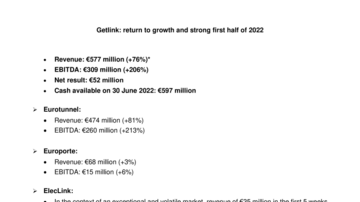 Getlink - Return to growth and strong first half of 2022.pdf