GETLINK: New arrival in the board of Groupe Eurotunnel SE

The board of directors of Groupe Eurotunnel SE met today and co-opted Bertrand Badré as an independent non-executive director in view of his strong experience in the areas where the group’s major challenges lie. Bertrand Badré will replace Philippe Camu, who is resigning from the board, and will serve for the remainder of Philippe Camu’s term of office. The co-option will be ratified by the next Groupe Eurotunnel SE Ordinary General Meeting.

Philippe Camu, who is a member of the investment committee of Goldman Sachs Infrastructure Partners (GSIP), is looking forward to being able to dedicate his full attention to establishing the new GSIP fund internationally. The whole board of directors of Groupe Eurotunnel SE warmly thanks Philippe Camu for his valuable expertise and his active and deep contribution to the work of the board during the seven years that he has been a member.

Bertrand Badré (49) is the founder and chairman and chief executive officer of the investment fund Blue Like an Orange Sustainable Capital, which aims to attract investment towards innovative economic projects in developing countries. In 2007 he contributed to the success of the restructuring of Eurotunnel’s debt while an associate of Lazard bank. Following that he was Group CFO Crédit Agricole, Group CFO of Société Générale Group, and managing director and group CFO of World Bank Group.

After this appointment, the board of directors will consist of 11 members led by Jacques Gounon, Chairman and Chief Executive Officer. The board will be 91% independent with a female composition still above 45%. The average tenure of the board will be reduced by one year as a result.

“On behalf of the board, I thank Philippe Camu for his sustained involvement in the service of the Group for seven years and I wish him full success in his new responsibilities. We are very happy to welcome Bertrand Badré as a new independent non-executive director. His profile, international finance and public affairs skills and his concern for sustainable development are valuable strengths that will bring a new and relevant perspective to the development of the Group and the implementation of its strategy.”

In addition, the board of directors also decided to propose at the next Ordinary General Meeting that the company’s articles of association be amended so as to raise the age limit for serving as Chief Executive Officer from 65 to 68. 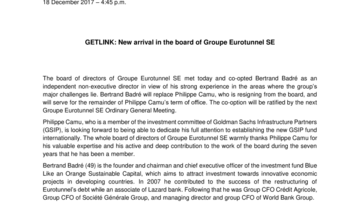 GETLINK: New arrival in the board of Groupe Eurotunnel SE