Given the current restrictions and in accordance with the measures adopted by the Government to slow the spread of the Covid-19 pandemic, Getlink's combined general meeting of shareholders, scheduled for 28 April 2021 at 10:00 am, will be held behind closed doors, without the physical presence of its shareholders or any other persons entitled to attend.

Getlink has taken measures to facilitate remote voting, so that shareholders can vote without being present at the general meeting via remote voting solutions (postal or proxy voting) and online via the secure voting platform VOTACCESS.

To promote shareholder dialogue, which Getlink particularly values, an exceptional system will be put in place to broadcast the meeting live and a recording will be placed on the company's website.

Following the separation of the functions of Chairman and Chief Executive Officer and the gradual rotation of its members, the Board of Directors will propose at the general meeting that Yann Leriche, Chief Executive Officer, and Mark Cornwall, British contract employee representative,  be appointed to the Board of Directors, following the end of Peter Levene’s mandate and Tim Yeo’s withdrawal[1] for having now exceeded 12 years in post.

The Board of Directors is delighted with this evolution and the enrichment of employee representation on the Board. Jacques Gounon, Chairman of the Board warmly thanks Tim Yeo and Peter Levene for their invaluable contributions to the Board of Directors’ work in preparing for Brexit and in the context of the Covid-19 crisis.

The Board exercised its responsibility by ensuring customer and employee safety, implementing measures to control operating costs and optimising investment spending. Getlink has not sought any government guaranteed loans, government guarantees or tax deferrals. As a solidarity-based contribution to the collective effort of employees on furlough, this was accompanied by a reduction in directors' fees and the remuneration of corporate officers and directors, as well as members of the executive committee and main senior executives.

Confident in its long-term outlook, Getlink confirms its commitment to shareholder return and will propose that the general meeting to be held on 28 April 2021, votes for the distribution of a dividend of €0.05 per share entitled to dividend.

The notice of the 7 April 2021 meeting[2] includes the detailed agenda and the draft resolutions, as well as the main methods of participation and voting at this meeting. The opinion and the reports of the Board of Directors, including that on the draft resolutions, as well as the other preparatory documents and information relating to this meeting, can be viewed on the aforementioned website, made available or communicated to shareholders in line with the conditions and deadlines provided for by applicable legal and regulatory provisions. Shareholders are invited to regularly consult the section dedicated to the general meeting on the website www.getlinkgroup.com, in order to have access to the most up-to-date information about the meeting.

Yann Leriche, 47, graduate of the École Polytechnique (1997), then the l’École des Ponts et Chaussées, Collège des Ingénieurs and ESCP Europe, began his career in the public sector, first as a road infrastructure project manager, then in the construction and operation of public transit systems. After extensive experience at Bombardier Transport where he became head of the transport systems “Guided Light Transit” directorate, Yann Leriche joined Transdev group in 2008. Initially CEO of Transamo, he then became CEO of the German subsidiary Transdev SZ and subsequently deputy director of transit activities in North America in 2012. In 2014, he was appointed as group chief performance officer and a member of the executive committee. From 2017 to 2020, he was CEO of Transdev North America, in charge of the group’s American and Canadian operations (17,000 employees, US$ 1.4 billion in revenue and serving more than 100 cities and urban areas with seven different means of transport) and was also in charge of the worldwide development of Transdev’s autonomous vehicle activities. Yann Leriche joined Getlink SE as Chief Executive Officer in July 2020.

Mark Cornwall, 53, joined the Group in 1993, after participating in the construction of the tunnel for five years (Norwest Holst), on the construction of overbridge one. He then joined Balfour Beatty as an overhead linesman on the installation of the catenary system. On completion of the catenary system he then joined Eurotunnel as a Catenary Technician before being appointed Catenary Group Leader in 2009.  During this time, he was appointed a Company Council Representative (a role in addition to Group Leader) then elected as Company Council Chief Representative in 2003. He has also had an active role on the European Works Council, working closely with his French colleagues for the past 18 years. 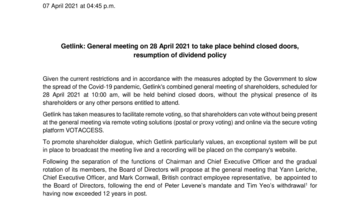