The Board of Directors, meeting on 23 February 2022 under the chairmanship of Jacques Gounon, resolved to convene the ordinary and extraordinary General Meeting of Getlink’s shareholders on 27 April 2022[1].

The Board of Directors agreed the financial resolutions to be proposed to the shareholders at the General Meeting as well as those relating to the unchanged remuneration of the Chief Executive Officer, the Chairman and the Directors. It is proposed that shareholders vote on a dividend of €0.10 per share.

In addition, in order to maintain strong credentials in geostrategic issues and British public affairs, the Board has decided to propose to the General Meeting the appointment of Lord Ricketts, a former UK Ambassador to France and a member of the UK House of Lords, as a member of the Getlink Board of Directors for a period of four years.

As an extension of its commitment to energy transition, the Board has decided to propose to the General Meeting the appointment of Brune Poirson as a member of the Getlink Board of Directors for a period of four years. Brune Poirson, a French former minister who has always been committed to sustainable development, will bring to the Board of Directors her expertise, particularly in environmental matters. She will contribute to expanding the Board's work on the Group's sustainable development strategy and related action plans.

In the same vein, the Board of Directors has decided to propose a resolution to shareholders for a Say on Climate advisory vote on Getlink's ambition and targets for the transition to carbon neutrality.

Subject to public health conditions at the relevant time, the combined General Meeting will be held in person on 27 April 2022 at 10:00 a.m. (CET) in Marcq-en-Barœul (Lille, France).

Born in 1982 in Washington D.C., of French and American nationality, and a graduate of the London School of Economics, the IEP at Aix and the Kennedy School at Harvard, Brune Poirson began her career in London, within the Foundation for Innovation of Great Britain, then joined the French Development Agency as a development coordinator in New Delhi, on a project for the distribution of drinking water in shanty towns. After some time as the director of sustainable development and social responsibility for one of Veolia's subsidiaries in Delhi, she joined a green start-up incubator in Boston. Brune Poirson was for three years French Secretary of State for Ecological Transition and the first French woman to be elected Vice-President of the United Nations Environment Assembly. Brune Poirson is Chief Sustainable Development Officer and a member of the executive committee of the French hotel group Accor.

Born in 1952, a British national and with an MA degree from Pembroke College Oxford and honorary doctorates from the University of Kent (DCL) and the University of Bath (DLL), Peter Ricketts, Baron Ricketts of Shortlands, began his career at the UK Foreign and Commonwealth Office (FCO) in 1974. He was posted to the UK delegation to NATO in Brussels before becoming assistant private secretary at the FCO to the then Foreign Secretary Sir Geoffrey Howe in 1983, then First Secretary at the Embassy in Washington (USA) in 1985, Head of Division in Hong Kong in 1990, advisor for European and Economic Affairs in the French Embassy in 1995 and deputy political director in 1997. In 2000, he was appointed chairman of the Joint Intelligence Committee, then in 2001 political director of the FCO. From 2003 to 2006, he was the UK Permanent Representative to NATO. In 2006, he became Permanent Under Secretary of the FCO, and in 2010, National Security Adviser to the UK government. From 2012 to January 2016, he was the UK’s ambassador to France and Monaco. A member of the UK House of Lords, chairman of the Normandy Memorial Trust (Voluntary Association) (UK), Vice Chairman of the Royal United Services Institute, London, Peter Ricketts is a member of the Board of Directors and a member of the nomination, remuneration and governance committee of ENGIE. 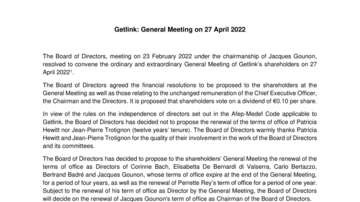