The Getlink SE Combined General Meeting was held behind closed doors in Paris on Thursday 30 April 2020, under the derogation conditions of Article 4 of Order no. 2020-321 of 25 March 2020, issued pursuant to the authorisation granted by the emergency law to deal with the COVID-19 pandemic, no. 2020-290 of 23 March 2020, under the chairmanship of Jacques Gounon.

All resolutions submitted to the vote by the Board of Directors have been widely approved[1].

After having approved the company accounts and consolidated accounts for the 2019 financial year, the Meeting voted the various elements of remuneration for executive officers with scores ranging from 98.70% to 99.68%.

The meeting also approved the renewal of the term of office as directors of Perrette Ray, Colette Lewiner, Peter Levene, Jean-Pierre Trotignon, the ratification of the co-option of Giancarlo Guenzi, as well as the election of Jean-Marc Janaillac and Sharon Flood as independent directors, respectively to replace Colette Neuville, whose term of office ended at the end of the General Meeting, and Philippe Vasseur with effect from 30 September.

Jacques Gounon thanked the shareholders for their almost unanimous support and commitment during this difficult period. He also thanked Colette Neuville for her valuable contribution to the evolution of the business since 2007 and praised her inexhaustible involvement. The Board of Directors is delighted to welcome Jean-Marc Janaillac, whose experiences will be of great value for the Board’s work. 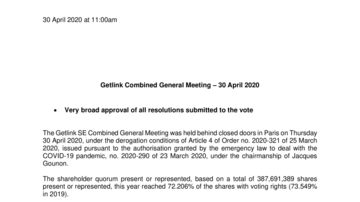