The Getlink SE Combined General Meeting was held at La Cité des Echanges in Marcq-en-Baroeul on Wednesday 27 April 2022, under the chairmanship of Jacques Gounon.

All resolutions submitted to the vote by the Board of Directors were widely approved[1]. After having approved the company accounts and consolidated accounts for the 2021 financial year, the Meeting voted on the various elements of remuneration for executive officers with scores ranging from 98.7% to 99.89% and a dividend payment of €0.10 a share.

The meeting also approved the appointments of Brune Poirson and Lord Ricketts, to replace Patricia Hewitt and Jean-Pierre Trotignon, and approved the renewal of the terms of office as Directors of Corinne Bach, Elisabetta De Bernardi di Valserra, Carlo Bertazzo, Bertrand Badré and Jacques Gounon and Perrette Rey for one year. The board still has 15 members with a female participation rate of 50% (excluding the employee representatives) and an independence rate of 67%.

Following the general meeting, the board of directors renewed Jacques Gounon in his mandate as Chairman of the board. 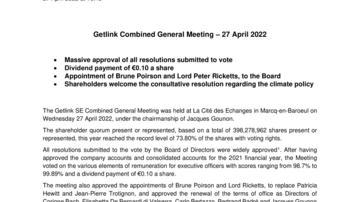