Eurotunnel and CargoBeamer have signed a partnership which will see the launch of a new, 100% unaccompanied rail freight transport service across the Short Straits, from Calais to Ashford.

The extension of the rolling motorway from Perpignan to Ashford is a logical step in developing a future international intermodal network between the Channel and the Mediterranean. A second route from Domodossola, in the Alps region, to Calais will also be extended to Ashford after its launch in early October. Both new railway services will prevent 8,000 tonnes of CO2 emissions[1], responding to the move to decarbonising freight transport and promoting modal shift. The launch of an unaccompanied freight service makes it possible to partially resolve the shortage of truck drivers in the UK and Europe as well as relieving traffic congestion on motorways.

This new service builds on the complementary expertise of both companies. Getlink brings not only the speed, flexibility, and reliability inherent in Eurotunnel Shuttle services, but also its expertise in frictionless border crossings and carriage maintenance at CargoBeamer Terminal in Calais through Europorte. CargoBeamer offers its customers the benefit of its commercial and logistical expertise through its rolling motorways from Perpignan and Domodossola.

Christian Dufermont, Freight Commercial Director of Eurotunnel, stated: “The signature of this partnership confirms our freight commercial strategy and is concrete proof of our customers’ increased interest in an unaccompanied cross-Channel service that helps decarbonise their logistic chains and improves flexibility.”

Nicolas Albrecht, Chief Business Development Officer of CargoBeamer, added: “We value the cooperation between Eurotunnel and CargoBeamer as another crucial step in developing new relations around our recently opened terminal in Calais. Connecting Europe and the UK by environmentally friendly rail is highly important to achieve our mission of reducing the carbon footprint of the logistics industry.”

Getlink SE (Euronext Paris) manages, through its subsidiary Eurotunnel, the infrastructure of the Channel Tunnel and operates truck and passenger Shuttle Services (cars and coaches) between Folkestone (UK) and Calais (France). Eurotunnel is the concession holder and operator of the Channel Tunnel, the fastest, most reliable, easiest and most environmentally friendly way across the English Channel until 2086. In 26 years, more than 460 million people and more than 90 million vehicles have travelled through the Channel Tunnel. This unique land link has become a vital link between the continent and the United Kingdom. Getlink also offers a rail freight business through its subsidiary Europorte, which offers a wide range of integrated rail services, as well as an electrical interconnection through its subsidiary ElecLink. https://www.getlinkgroup.com

The CargoBeamer Group is a logistics service provider in the “combined transportation road-rail segment” based in Leipzig, Germany. Thanks to the company's technology of railcars, handling terminals and logistics software nearly all standard semi-trailers of all types can use the train – without additional conversions and reinforcements for the trailer and even without a driver and tractor unit. CargoBeamer trains currently run on four different routes including locations in Germany, France, Italy and Poland. In the medium-term CargoBeamer will realize a European route-network of high-performing and innovative transhipment facilities at important transport hubs. This will secure sustainable rail-transport for hundreds of thousands of semi-trailers per year – reducing CO2-emissions and relieving environment and society. 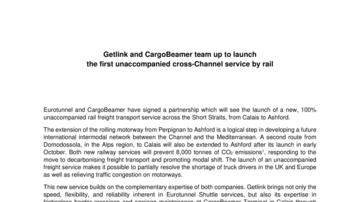