“The Group has seen its ninth consecutive year of growth and has had an exceptional 2018 from both operational and financial perspectives with results that exceed market expectations. The Group is focusing on Brexit from a solid foundation in order to provide our customers with the best possible service whilst increasing our competitiveness.”

HIGHLIGHTS OF THE YEAR

Operating costs amounted to €510 million, an increase of only €5 million compared to 2017.

Consolidated EBITDA amounted to €569 million, an improvement of €46 million compared to 2017 at constant exchange rates, of which €19 million is due to the application of the new IFRS 16 standard.

After taking into account the impact of IFRS 16 on depreciation charges (+€ 18 million) which offset the improvement in EBITDA, the trading profit increased by €24 million to €395 million (+6%).

With confidence in the robustness of its business model and the very good results in 2018, the Group confirms its intention to accelerate the dividend policy for its shareholders. It will therefore propose at its AGM to increase the dividend to €0.36 per share for the 2018 financial year, an increase of 20% compared to 2017.

Confident in the commitment of both States to quickly set up effective border control procedures without any operational discontinuity, the Group sets a financial objective of an EBITDA for 2019 of €560 million in the case of a “no deal” or €575 million, if an agreement is reached, at an exchange rate of £1 = €1.128.

Nevertheless, and despite this short-term uncertainty, the Group remains very confident in the solidity of its various businesses and their medium-term growth potential. The Group still expects to exceed €735 million in EBITDA by 2022 (at £1 = €1.14).

Dates for your diary

The Board of Directors at its meeting on Wednesday 20 February 2019 under the chairmanship of Jacques Gounon, approved the financial statements for the year ending 31 December 2018.

The financial analysis of the consolidated financial statements is available on the Group’s website:

Getlink SE’s consolidated and parent company accounts for 2018 have been audited and certified by the statutory auditors. 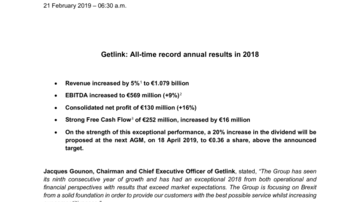