"The Group has seen its eighth consecutive year of growth and has had another excellent year from both operational and financial perspectives. The outlook for the years to come is equally positive notably for cash generation, enabling the Group to commit to a dividend increase of €0.05 per year for the next few years".

Jacques Gounon, Chairman and Chief Executive Officer of the Group

EBITDA over €700 million following the ElecLink start-up in 2020

An increase in dividend of €0.05 per share per year

KEY EVENTS FROM THE PAST YEAR

The refinancing of the Group’s floating rate debt reduced interest payments by €60 million per year and reduced average cost of debt to below 4% from the second half year of 2017.

Revenue from Shuttle Services increased by 3% compared to 2016 due to increased yield thanks to a high quality of service.

Le Shuttle attained an annual car market share of 54.9%, confirming once again its leadership in the Short Straits market. The Pets service, one factor in customer loyalty, had another record year, with 331,372 animals transported (an increase of 10% compared to 2016).

The Truck Shuttle service consolidated its traffic position through the year in 2017, with a market share of 39.1%.

Eurostar carried more than 10.3 million passengers in 2017, buoyed by a record end to the year. This return to traffic growth, the announced launch of Eurostar services between London and Amsterdam on 4 April 2018 and the prospect of services to other cities in France are further encouragement for future growth in this traffic.

Revenue for Europorte has increased by 2% compared to 2016 due mainly to an increase in volumes from major customers in the automobile, chemical and cereal sectors as a result of the quality of service provided.

Work is progressing on schedule.

Entry into service is planned for 2020.

Operating costs reached €507 million, an increase of only 1%.

The consolidated EBITDA amounted to €526 million, an improvement of €32 million compared to 2016 at a constant exchange rate.

In 2017, the Group has once more demonstrated the strength and balance of its economic model in all circumstances.

The Group remains very confident in the sustainability of its Fixed Link business and in its potential for growth. Eurotunnel continues to be, and will increasingly assert itself as, the principle choice for trade and movement of people between the UK and continental Europe.

The Group follows developments relating to the exit of the United Kingdom from the European Union, and is pleased that negotiations have proceeded to the 2nd stage and that a transition period with follow the exit on 29 March 2019.

Analysis of economic forecasts for areas that are important for the Group’s business (Greater London, Kent, Western Europe), reinforces these fundamental strengths.

The Group is determined to grow traffic volumes through the Tunnel whilst also increasing its margins. To do this, the Group will pursue a commercial policy that is attractive through the quality of service, the digitalisation of processes and cooperation with railway operators, all whilst achieving targeted investments such as the enlargement of the terminals or the opening of the new Flexiplus lounge on the Folkestone terminal forecast for the first half of 2018.

The Group, which has created value through its rail freight activity, will proceed with the development of Europorte in 2018, whilst continuing to focus on the profitability of its operations.

The Group will continue to optimise its financing structure to enable, when market conditions permit, to undertake a reduction in the costs of servicing its debt over the long term.

With confidence in its future, the Group confirms its financial objective of an increase in EBITDA to €545 million in 2018. This objective is the update of the one announced previously, taking into account an exchange rate of £1=€1.14 and a four-month delay in the implementation of the new London-Amsterdam service.

The start of ElecLink operations in 2020 will represent a significant step change in the Group's profitability. In total, in the current context, the Group believes it should exceed an EBITDA of €700 million (at £1=€1.14) in 2022.

The Group confirms its intention to continue with its policy of a regular growth in dividend payments to shareholders with a target increase per share of €0.05 per year.

Dates for your diary

At its meeting on Tuesday 20 February 2018, the Board of Directors under the chairmanship of Jacques Gounon, finalised the accounts for the year ending 31 December 2017.

The financial analysis of the consolidated accounts is available on the Group's website:

The Group’s consolidated and company accounts for 2017 have been audited and certified by the statutory auditors. 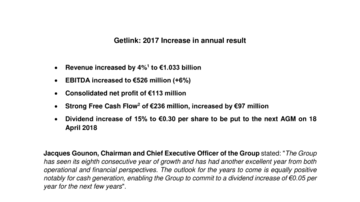