Operating on the heritage West Somerset Railway line, locomotive 59 003 left Bishops Lydeard at 11:55 and made the 20.5 miles (33.0 km) journey to Minehead, arriving at 13:10 where it is taking part in the weekend Mixed Traction Diesel Gala.

The Yeoman Highlander was purchased by GB Railfreight due to its heavy haul capability. It can be used to shift anything from stone aggregate to oil tankers.

This once again affirms the company’s commitment to not only growing UK rail freight, but also boosting the supply chain across the various sectors. British companies will now be able to benefit from a locomotive that has successfully hauled coal trains in Germany for the last 15-20 years.

John Smith, Managing Director at GB Railfreight, said:
“Following the successful test run from Eastleigh to Guildford last week, today’s run of the 59003 on the West Somerset Railway is testament to all the hard work that’s been put in modifying the locomotive for UK use. As I’ve previously stated, the Highlanders’ heavy haul capabilities are a great addition to GBRf’s fleet and will be used on flows across the UK so that we can continue to deliver the best service for our customers.” 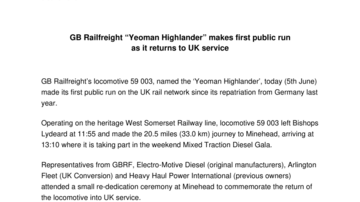