GB Railfreight today [28 August] thanked the generosity of its staff and customers as they announced that the company raised a record amount for blood cancer charity Leukaemia & Lymphoma Research on the second of two Charity Railtours run this year, making it the most successful single charity event in the company’s history.

Over 30 GBRf staff were involved in event preparations and organisation of both trains, but a special thanks goes to Dale Williams, Richard Owen, Richard Pinker, Paul Taylor, for making this happen.

Following on from the first charity charter which ran in July and raised almost £10,000, the second Railtour took place on 9th August 2015, and raised £21,170 for the charity as part of a year-long fundraising effort, which has so far raised in excess of £55,000.

Running under the name of ‘The Noah’s Arc’, GBRf ran the charity charter train journey for enthusiasts, between Glasgow and Crewe, leaving the Scottish city at 0942 and arriving at Crewe at 2059.

During the journey, the guests on board took part in fundraising collections, an on-board raffle, and even enjoyed a specially brewed beer, the proceeds from which all went to the charity. The event was run by GBRf staff who had all volunteered to work in their own time and on a "not-for-profit" basis.

Locomotives used for the event included two Class 47s between Glasgow and Newcastle, two Class 66s between Newcastle and Doncaster, and two Class 20s between Doncaster and Crewe.

The charter train forms part of the freight operator’s year long fundraising efforts for Leukaemia & Lymphoma Research, which has included previous charter trains across the UK, marathon runs, quiz nights, dress down days and many other events.

In September, members of the GBRf team are doing a charity skydive, the Three Peaks Challenge and a 3-day cycle ride in the north of England. To donate please visit https://www.justgiving.com/GB-Railfreight/

Jeanette Smith, Business Support Manager at GB Railfreight, said:
“It goes without saying that we are over the moon with all the effort our staff and their families put in each and every year to raise funds for our nominated charities. This  year is no exception, but when the team who ran this charter provided me with the  final figure raised on this event, it was mind blowing.

“It is such a motivating and encouraging experience that everyone gets together in  their spare time to do this and it does certainly reflect on their commitment to GBRf.  Each year we have a target for our charity and this has far exceeded our expectations, so a big thank you to each and everyone involved. We are also pleased that our other  staff charters added to this success with additional funds. Well done!”

Keri Wyatt, Regional Manager for Scotland at Leukaemia and Lymphoma Research, said:
“We want to thank all of the kind staff, many of who worked over their own time to  support the events over the weekend, those who organised the events, and the staff and customers who attended and donated so generously. We are truly grateful to  every single one of you.

“Seeing carriage after carriage of a 1940’s train full of happy staff, customers and  families waving Leukaemia & Lymphoma Research flags and enjoying a fantastic day out, is a memory that I will treasure and I hope all those who were on board will too.” 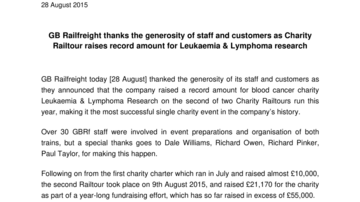