GB Railfreight took home the prestigious Railfreight Excellence prize and the Business Manager of the Year award at the Rail Business Awards 2013, two of the 21 available categories overall.

In front of industry professionals, industry regulators and trade journalists, the company won the first prize for demonstrating overall rail freight business excellence in 2013. Assessed individually by Julian Worth, a long-time strategic adviser on rail freight, and approved by a wider 20-person judging panel, it was judged on a range of criteria, ranging from the development of new services to performance improvements.

In the Rail Business Manager category, GBRf’s Finance Director, David Simons, was awarded the prize for various proven achievements throughout the year. Assessed individually by Tim Hartley, Principal at Odgers Berndtson, and once again approved by the 20-person panel, this included the ability to identify and address key business issues faced by the company and the contribution to new business. David is due to retire later this month, having spent 13 years at GBRf.

In what has been a successful year for GB Railfreight, these prizes build upon the operator’s achievements at the Golden Whistle Awards back in January, when it won the award for the Most Improved Freight Operator, using the Freight Performance Measure (FPM), and the Most Improved Operator, in terms of self-delay minutes.

The Rail Business Awards is Britain’s longest-running industry awards and represents the recognition and celebration of the rail industry’s success and growth. It occurs annually, with this year’s ceremony taking place at the London Hilton Hotel, Park Lane, on 27 February 2014.

“GB Railfreight is delighted to have picked up two prestigious prizes at the 2013 Rail Business Awards. This is representative of all the hard work we’ve put in as a team this past year, as well as the progress we’ve made individually. We’re looking to make 2014 even bigger and this will no doubt drive us forward in our endeavours.” 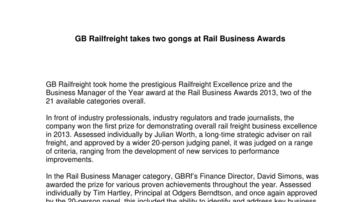