GB Railfreight yesterday (2nd August) ran its first train for Siniat, as part of a new five-year contract to transport gypsum to the plasterboard producer’s factories in Portbury and Ferrybridge.

In September 2014, the rail freight operator won a short-term contract with Siniat to transport gypsum between West Burton and Portbury, operating four trains per week and using one box wagon set.

GBRf will continue to operate this flow from 1st August, but will more than double its freight operations for Siniat as GBRf will also now take over running six trains per week from Cottam to Ferrybridge, involving a second box set.
The award of this contract, including the additional services to Ferrybridge, highlights the effective operations undertaken by GBRf since last September and the important role the company plays in supporting the UK construction supply chain.

John Smith, Managing Director of GBRf, said:
“We have been working closely with Siniat over the last year to ensure that they receive the most effective rail freight solution for gypsum haulage from West Burton to their Portbury factory, and the doubling of our contract demonstrates the success of these operations.

“As an industry, rail freight works hard to support the efficient movement of goods for the UK supply chain and GB Railfreight takes pride in helping to keep this country’s construction sector moving. We look forward to a close working relationship with Siniat over the next five years.”

Andrea Deakin, Business Unit Gypsum Strategy Manager at Siniat, said:
"As a key supply partner on thousands of construction projects across the UK, we need to ensure that our raw materials arrive on time, and in the right quantity, every single day. GB Railfreight have proved themselves to deliver on their promises and Siniat are very pleased to have signed this new contract with them." 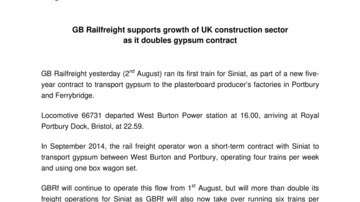