GB Railfreight runs first train for Drax from the Port of Liverpool, opening up new paths across the transPennine rail network

GB Railfreight yesterday (26 October) ran its first train for Drax Power from the Port of Liverpool to the company’s Power Station in Selby, North Yorkshire, transporting 1,600 tonnes of biomass pellets.

The Port of Liverpool is a loading location included on GBRf’s contract for hook and haul services with Drax Power. GBRf currently runs two sets of Drax wagons.

This operation represents the start of Phase 1 of the Liverpool project, with phase 2 to be completed in 2016. The objective is to stimulate greater throughput at the new terminal  increasing trains from this location, and ultimately using four sets of wagons to move up to 3mt of biomass per annum from Liverpool (Peel Ports) to Drax Power Station.

A major challenge to establishing this new flow to Drax was securing paths across the TransPennine rail network. Previously the majority of freight operations east-west have been residual traffic. Two years ago Drax, working with Network Rail and GBRf, identified viable paths that could support a train plan to and from the Port. GB Railfreight has since been working closely with Network Rail and Drax to make this service a reality.

GBRf became the first rail freight operator to move biomass by rail in the UK back in 2010, as part of its contract with Drax Power.

John Smith, Managing Director of GBRf, said:
“The running of the first biomass train for Drax Power from the Port of Liverpool is an important moment for GB Railfreight. Over the last two years, we have been working with Drax and the infrastructure operator to secure viable paths across the TransPennine rail network and answer the demands of one of our longest and most loyal customers.

“Today is recognition of these efforts and the innovative approach we take to customer solutions. We’re looking forward to building on this relationship with Drax as we move into Phase 2 of the Liverpool project.”

Graham Backhouse, Drax Head of Supply Chain & Logistics, said:
“This first delivery of sustainable biomass from the Port of Liverpool is further evidence of Drax powering the Northern Powerhouse.

“Using cutting edge biomass technology we are transforming the UK’s largest Power Station into one of Europe’s largest generators of renewable electricity.  Receiving biomass from Liverpool is another example of how we provide the UK with sustainable, reliable and affordable energy.” 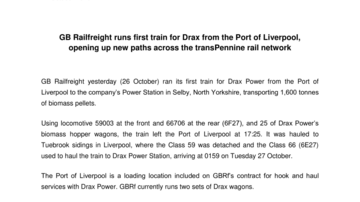