The locomotive is being named to celebrate the Saints’ most consistent run of success in over 60 years, which has included nine cup finals in seven years and the 2014 Aviva Premiership and European Challenge Cup titles.

The ceremony took place at the Wellingborough Railhead in Northampton, leased by GRS Roadstone, and near to Franklin’s Gardens – Northampton Saints’ ground.

The rededicated locomotive “Northampton Saints”, number 66 754, was one of the 21 new Class 66s that GB Railfreight purchased from Electro-Motive Diesel (EMD) as part of its largest ever investment in locomotives. The diesel locomotive is used throughout the UK on a whole range of different freight services.

John Smith, MD of GB Railfreight, said:
“With only a few games left to play, it has been another exciting season for the Saints. We thought a great way to celebrate would be to rename one of our Class 66s after them - the first time in history that a train has been named after a rugby club.

"The locomotive will continue to haul freight services across the country but now it will also do the important job of celebrating one of our country’s top rugby clubs at the same time.”

Jim Mallinder, Director of Rugby, said:
“We’re honoured that GB Railfreight and GRS Roadstone have made the decision to name a locomotive after Northampton Saints. It is not something that happens all that often, especially for a rugby club, and is something that we can be proud of.”

Martin Hill, Chair of GRS Roadstone, said:
“GRS have had the pleasure of working closely and successfully with GB Railfreight for many years and we are sponsors of the Saints, which has brought us and our customers’ lots of enjoyment. This is why it is a real honour to be a part of today's naming ceremony.” 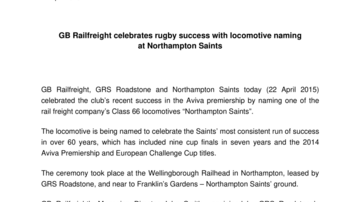