In a submission to the Mayor of London’s consultation on the London Infrastructure Plan 2050, GB Railfreight has called for further evaluation of aggregates markets across the Capital, in order to address actual and prospective growing market demand and assess where new or expanded aggregate freight terminals are warranted.

These infrastructural developments will play an important role in facilitating the Government’s freight modal shift from road to rail and support growth across UK manufacturing and construction.

In addition, GB Railfreight is also recommending that the Mayor:

The London Infrastructure Plan 2050, commissioned by the Mayor of London, seeks to set out London’s strategic infrastructure requirements to 2050. Given the projected population increases in the Capital, the infrastructure needs of various sectors, including public transport, energy, water and waste, are being assessed and key priorities and approach methodologies put in place to answer them.

“With two years left to run on the Capital’s landbank of permitted aggregate reserves and congestion increasing on the North London and South London Lines, the industry and the Mayor of London need to work together to support the growth of rail freight in London.

“Rail freight is a sustainable and efficient way of transporting aggregates around the Capital in order to build the infrastructure projects required to boost economic growth and will help to take lorries off London’s roads.

“The London Infrastructure Plan 2050 is a step in the right direction and GB Railfreight welcomes its recognition that freight plays an important role in transporting products and materials through London. GB Railfreight looks forward to working with the Mayor of London to maximise the potential of freight in London." 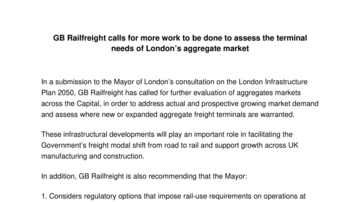