In proceedings at Cambridge Station, John Smith, Managing Director of GB Railfreight, and Richard Schofield, Route Managing Director at Network Rail, led a tour of the signal box and the station, before unveiling the nameplate in a ceremony on Platform 6.

Opened in 1984, Cambridge Power Signal Box has served the Fen Line from just north of Stansted to Kings Lynn, as well as the Cross Country route from Manea to Chippenham Junction.

Network Rail has affirmed its commitment to documenting the history and way of life associated with signal boxes across the UK, and this ceremony highlights GB Railfreight’s support in this venture.

John Smith, Managing Director of GB Railfreight, said: “Power Signal Boxes have played a key part in the historical development of this country’s railways. Cambridge Power Signal Box, in particular, has served the Cross Country and Fen Line routes well over the past 30 years, and GB Railfreight believed it was important to recognise these accomplishments by naming our 66733 after it.”

Richard Schofield, Network Rail Route Managing Director, said: "Cambridge Power signal box has successfully served the railway for three decades and this is a tribute to the people who have worked in it." 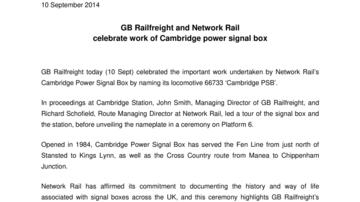