The new 3-year contract is for one train a day (Monday to Friday) in partnership with FCC Environment, who GBRf have signed a material storage, handling and haulage deal with. Each loaded train is formed of 20 box wagons, which is the equivalent of removing about 70 lorries from the road or 350 lorries per week.

The site handles soil waste from a variety of locations in London, including construction sites and development areas. Waste material arrives at the site by lorry where it gets deposited, prior to being transported by rail.

Locomotive 66709 departed the North London Railfreight Terminal at 1215 and is the first train to run under the new agreement to take spoil up to FCC Environment’s Calvert Waste Management Facility in Buckinghamshire. The ultimate end use of the materials is reuse or recovery rather than disposal.

GBRf have signed a head lease with Network Rail to commence operating from the Cricklewood site, a location that had not been in use for a number of years. GB Railfreight have called down and leased the strategic freight site through a property deal with the infrastructure provider and are now working in partnership with FCC Environment, who procure the material and arrange road movement into site [1], and Material Handling Ltd, who manage the handling, storage and loading of material.

John Smith, Managing Director of GB Railfreight, said:
“As London continues to build, more and more construction soils and materials need to be able to leave the capital efficiently and with least cost to the environment at a time when London’s roads are already seriously under strain.

“With major projects like HS2 and Crossrail 2 in the pipeline the rail freight sector can provide a reliable solution. This new service out of Cricklewood demonstrates our  commitment to doing our bit to support the construction sector in London, removing  350 lorries from the road per week.”

Phil Amos, Senior Accounts Manager of GB Railfreight, said:
“The successful commencement of operations at this location, and the running of  trains from Cricklewood to Calvert, reflects the hard work of a number of parties over many months to return this site to an active railfreight terminal. We very much look  forward to providing FCC Environment with GBRf’s customary high levels of  performance and customer service on this flow.” 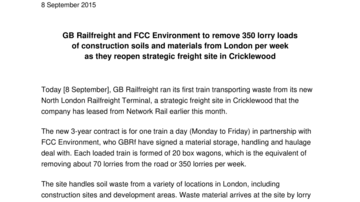