In proceedings at Electro-Motive Diesel Ltd.’s Doncaster Roberts Road depot, which opened one year ago, John Smith, Managing Director of GB Railfreight, and Brian Edwards, Vice President of Sales, Locomotive Service Operations & Customer Performance at Progress Rail Services Corporation & EMD, spoke about the importance of the project for what was GB Railfreight’s largest ever investment in new locomotives.

The locomotive was named “EMD Roberts Road", in recognition of the significant investment made by EMDL in the Roberts Road depot that primarily serves GB Railfreight’s daily freight operations. The name was also meant to honour the EMDL employees at Roberts Road who play such a pivotal role keeping GB Railfreight’s fleet operating at the top of all industry measures.

Railfreight and engineering staff were joined at the event by EMDL employees, the Mayor of Doncaster Ros Jones, the Chief Executive of Doncaster Council, Jo Miller, and various members of the rail press, exemplifying the significance of the project for the local community, as well as the wider rail freight industry.

John Smith, Managing Director of GB Railfreight, said: “It is incredibly fitting that, on the day when the third batch of our Class 66 locomotives start their journey on UK soil, we celebrate the project with the naming of the 66753 locomotive. This has been a project of huge significance to the growth of GB Railfreight – the largest investment in locomotives in our company history – and I want to thank everyone at EMD for making the project such a success”.

Scott Garman, EMDL Sales Director, said: “I am delighted to be a part of this event, celebrating the strong relationship between GBRf and EMD. It is also gratifying to know that the UK freight operating companies put their faith in the Class 66, which continues to be the most productive, economical and reliable diesel locomotive in the UK.”

Mayor of Doncaster, Ros Jones, said: “With two of the biggest names in rail, based in the town and linking up on this deal, it is another example of how Doncaster and the rail sector go hand in hand.
“GB Railfreight has invested heavily in these new iconic locomotives which will be customised for the UK at Electro-Motive Diesel’s Doncaster depot with safety systems and radios as well as receiving their final sign off so they can enter use.

“Doncaster is and always will be, the home of rail, a message that will be promoted by the newly-named ‘EMD Roberts Road’ locomotive as it travels up and down the country. With the national High Speed Rail College coming to the town soon, I have every confidence we will continue to be at the forefront of this expanding industry.” 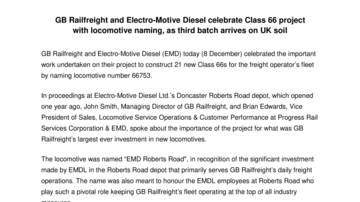