‘Project Sence’ is the project name given to the new extension to Bardon Hill Quarry because the source of the River Sence lies just to the north of the new quarry. This extension will secure the life of the quarry for the next 40 years, safeguarding onsite jobs and delivering construction materials for the UK.

Bardon Hill Quarry is an important rail-linked quarry. It produces on average 3 million tonnes of crushed rock each year, with around one third distributed by rail. GB Railfreight runs five flows a day, five days a week from the quarry taking the stone to handling sites in Sheffield and London.

Earlier this year, GB Railfreight officially announced that it had signed a five-year deal with Aggregate Industries, to transport aggregates, such as sand and stone, from AI quarries to various depots and handling sites across the UK.

John Smith, Managing Director of GB Railfreight, said:
“GB Railfreight is honoured to rededicate one of our locomotives to celebrate ‘Project Sence’ and the important role the extension of Bardon Hill Quarry will play in sustaining the future of quarrying in Leicestershire. It signifies the close working relationship we have with Aggregate Industries and is an important part of the growing aggregate operations we run across the UK.”

Philippe Frenay, Director of Aggregates and Cementitious Materials Division at Aggregate Industries, said:
“Last year we transported almost a million tonnes of aggregate from Bardon Hill by rail. That’s around a third of our total production for the year. If we’d had to rely on trucks to deliver this stone, we’d have used in excess of 30,000 of them. Transporting by rail means that we can keep lorries off the roads, making our highways safer, cleaner, less congested and more environmentally friendly for the people of Britain. The dedication, professionalism and experience of John and the GB Railfreight team have proven invaluable and we look forward to many successful years working together.” 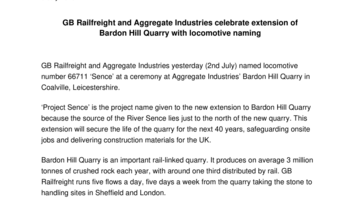