In order to deliver further growth GB Railfreight has decided to strengthen its existing fleet of locomotives by the procurement of a further 13 Class 66 locomotives from Electro-Motive Diesel Inc. (EMD) and the purchase of 16 Class 92 electric locomotives from its mother company, Europorte, a subsidiary of Groupe Eurotunnel.

On top of the purchase of eight Class 66 locomotives from EMD announced in September last year, this brings the total number of additional locomotives on order for the GB Railfreight fleet to 37.

The company hopes this procurement drive will double turnover over the next three years, which is currently in excess of £100 million a year.

The purchase of 21 Class 66 diesel locomotives will take GB Railfreight’s current Class 66 fleet to 71. They will be delivered by Chicago-based Electro-Motive in late 2014. The locomotives have been secured ahead of the change in EU emissions legislation which, from January 2015, sees new regulations coming into force [1] that could impact the ability to obtain compliant and affordable locomotives.

The 16 Class 92 electric locomotives have been bought from Europorte, a subsidiary of GB Railfreight’s parent company, Groupe Eurotunnel. This type of locomotive was specially designed for traction through the Channel Tunnel. With European Technical Specifications for Interoperability (STI) now applying to the Channel Tunnel, these locomotives can be used on different routes, as they already are for other Class 92 owners. They are the first Class 92 locos in GBRf’s ownership and will form part of the company’s plans for future development of international traffic and electric haulage on the UK rail network.

“GB Railfreight has taken a giant leap forward in its locomotive procurement in a bid to improve the quality of our services, meet current and future demand and double turnover over the next few years.

“We have an excellent working relationship with Electro-Motive Diesel and, ahead of the change in EU emission legislation, the purchase of more locos allows us to grow our fleet of Class 66s in order to service the growing demand from our customers. The purchase of Class 92s from Europorte will help grow international business and is also an important step towards preparing the company for the electrification of sections of the UK’s rail freight system.”

“This procurement, the largest in our company’s history, is a proud moment for us and is a sign that we are investing in the future of rail freight in this country. In return, we need to see a long-term sustainable approach to rail freight pricing in the UK in order to allow us to continue building a rail freight sector that truly serves the UK economy”.

"I am extremely pleased with the decision of GBRf in selecting EMD Class 66 locomotives for its expansion plans. GRBf is an innovative and valued business partner in the European rail market, and we are proud they have chosen Electro-Motive to support their growth plans. This decision reinforces the position of the Class 66 as the most productive and dependable diesel locomotive in the UK"

“Eurotunnel Group is committed to driving the development of international and domestic rail freight traffic in the UK and France. GBRf delivers an outstanding service and it is our responsibility to support its profitable growth and the increase in international traffic through the Channel Tunnel, contributing to the preservation of the environment via low carbon freight transport in the UK.”

1.    The European Regulations referenced are the Non Road Mobile Machinery directive from which the current flexibility period allowing engines compliant with Euro 3A exhaust emissions expires on 31 December 2014.
2.    GB Railfreight is one of the UK's leading rail freight companies. It operates around 650 trains a week in the UK and is the main transporter of coal on the rail network and the only rail freight company with regular contracts to move biomass.
3.    Founded in 1922, EMD Inc. is one of two U.S. original equipment manufacturers of diesel-electric locomotives. EMD was acquired in August 2010 by Progress Rail Services Corporation, a wholly owned subsidiary of Caterpillar Inc.
4.    Europorte, a subsidiary of Groupe Eurotunnel, purchased GB Railfreight in June 2010 for £26.3 million. It has operated on the Channel Tunnel route between Britain and France since its formation in 2009. 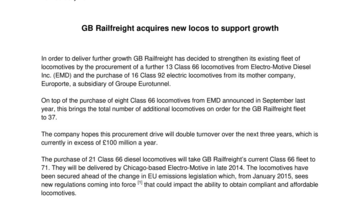