The high-speed freight train number 27274 (which has a potential load of 120 tonnes of parcels equivalent to 7 articulated trucks) left Lyon-St Exupéry airport on Tuesday, 20 March at 16:42. It arrived at St. Pancras International Station in London this morning travelling on High Speed One, via the Channel Tunnel, having previously stopped to load additional cargo at Roissy (Paris-Charles de Gaulle airport).

The Express Rail Euro Carex operation could, in time, be connected to the trans-continental distribution network for next-day delivery with a lower carbon footprint lower than air and road transportation. The express freight business could also be complemented by traditional freight and road freight.

This achievement has been made possible by a seamless coordination between the main European airports which are members of Euro Carex (Paris - CDG, Amsterdam, Liège and Lyon), the infrastructure managers (Eurotunnel, High Speed One and the manager of the French railway network Réseau Ferré de France) the operators (SNCF and Europorte) and their carriers (Air France KLM

Cargo Martinair Cargo, Chronopost International, Dimotrans, FedEx Express, Géodis, Geopost, TNT, WFS). Euro Carex is a project on a truly European scale and it is part of Eurotunnel’s strategy to promote the use of the Channel Tunnel for the transfer of freight between the UK and continental Europe.

Euro Carex offers a potential solution to the continuous rise in fuel prices, road congestion and environmental constraints which limit the number of night flights.

Yanick Paternotte, member of the French parliament and Chairman of EURO CAREX, stated:

“I am delighted that today’s test over the European high speed rail network clearly shows the interest of strategic players in the logistics field – airports as well as rail operators –in linking their infrastructures to key European economic centres in order to benefit businesses and communities.” 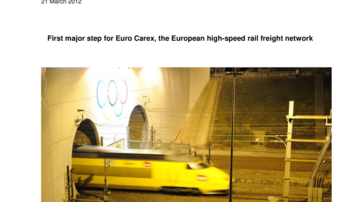