Today (Wednesday 7 July), after 90 days in charge of Eurotunnel, the Board of Directors and the new management team has informed shareholders of the analysis they have made of the company and outlined the conditions for its recovery:

In order to halt the decline in turnover from its Shuttle Services, Eurotunnel is reorganising its pricing policy, whether for the strategic freight sector, cars or coaches. Eurotunnel is also ready to put forward a new framework governing its relations with other train operators. Finally, the Europorte 2 rail freight project has been reconsidered and re-launched on a more solid basis.

The new Eurotunnel management puts the potential for cost savings at €40 million per year, at least. In order to achieve these savings, two plans have already been launched and will bear fruit within a year at the outside. The company reorganisation that has already been announced should contribute to these savings.

3.    Reach a sustainable level of debt

Eurotunnel is actively working on a refinancing plan; the new management team has surrounded itself with the best possible legal and financial advisers and has established initial contacts with its creditors.

"Eurotunnel’s recovery is becoming possible; we have identified the conditions that need to be met, but time is short. A long-term plan will be finalised at the end of October. It will set out Eurotunnel’s new financial and operational strategy, the broad outlines of which will be made known at that time."

Eurotunnel's interim results will be published on 26 July 2004. 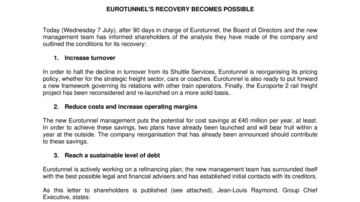