At approximately 04:00 this morning, Eurotunnel welcomed the 25 millionth truck to use its Le Shuttle Freight service since the service began on 25 July 1994.

This 25 millionth truck, from the fleet operated by UPS, the express courier specialist, was carrying packages from Germany, many containing items such as clothing, shoes or electronics purchased the previous day via the Internet. The rapid growth in e-commerce, between 20-30% per anum, shows how essential the Channel Tunnel has become in the transport and logistics infrastructure linking the United Kingdom to continental Europe. Approximately one million e-commerce packages transit via the Channel Tunnel every day.

EY, in its research paper, "Economic Footprint of the Channel Tunnel", published in November 2016, estimated that goods linked to express and courier services transported through the Channel Tunnel have a value of around €30 billion per year and are responsible for 272,000 jobs across Europe. 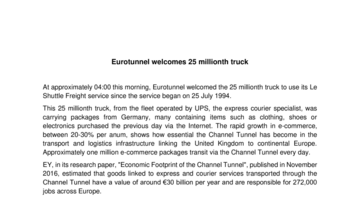