Eurotunnel has been awarded the Carbon Trust Standard for its commitment to managing and reducing its carbon footprint.

This award comes after the Carbon Trust Standard Company carried out a three month assessment of the group’s sustainability strategy, management and implementation of carbon reducing policies, in particular for 2006, 2007 and 2008.

Three main projects were highlighted for the significant impact they have had and continue to have in reducing Eurotunnel’s carbon footprint:

These three headline projects were supported by a raft of other activities including investments in new equipment, training and communications with Eurotunnel’s many customers.

The Channel Tunnel was conceived and built with the environment in mind and Eurotunnel has continued to work to reduce its carbon footprint over the fifteen years since the inauguration on 6 May 1994.

Achieving the Carbon Trust Standard is recognition that Eurotunnel’s Shuttles are reducing the carbon emissions involved in travelling across the Channel to the Continent.

“With more and more customers making purchasing decisions based on a company’s impact on the environment, sustainability is an essential element of future business success.

The Carbon Trust Standard is the benchmark for companies to achieve. It is a rigorous and demanding measure of our impact on the environment and I am delighted that Eurotunnel has passed with flying colours.”

“Eurotunnel’s achievement of the Carbon Trust Standard represents real and vital progress in reducing emissions in the transport sector. Their commitment to continue to reduce these emissions over the next two years builds on their 15 year focus on minimizing their environmental impact. The Carbon Trust Standard is working with a wide range of forward looking companies and organizations, to recognize their reduction efforts, which will ultimately turn our vision for a low carbon economy into reality”.

In order to make customers more aware of its commitment to sustainable development, Eurotunnel has recently "wrapped" part of one of its Shuttles in a picture representing the beauty of the natural environment. 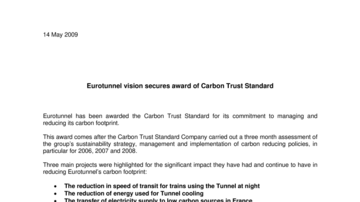