Eurotunnel has launched a project to install a state of the art radio communication system in the Channel Tunnel which will provide full interoperability with the entire European railway network by 2014. The contract with Alcatel-Lucent, announced on 15 December 2009 is for GSM-R, the first phase of the ERTMS (European Rail Traffic Management System).

To strengthen cooperation with the adjoining networks1 and in order to control costs, Eurotunnel has signed a contract of circa €11 million with RFF, that will run until 2025, to share equipment (network, fixed terminal servers) and maintenance under the conditions of the performance regime for the track to train radio system used on the Eurotunnel infrastructure.

The partnership will enable:

Eurotunnel has always maintained its infrastructure to the highest standards and now hopes to facilitate the introduction of real competition in cross Channel rail services.

“The level of interoperability achieved through the installation of the GSM-R system, and the introduction of new international services, opens up the possibility of an optimal use of the capacity available in the Channel Tunnel”.

"This collaboration between infrastructure managers, especially in an area that is so strategic in terms of safety as the communication between track and train, is a new step towards greater harmonisation in European railway transport".

Groupe Eurotunnel (Euronext Paris: GET and London Stock Exchange: GETS) manages the infrastructure of the Channel Tunnel and operates accompanied truck shuttle and passenger shuttle (car and coach) services between Folkestone, UK and Calais, France. Eurotunnel holds the concession until 2086 to operate the Channel Tunnel, the fastest, most reliable, easiest and most environmentally friendly way to cross the Channel. In 17 years, nearly 265 million people have used the Channel Tunnel. This unique land crossing has become a vital link between the continent and the United Kingdom. Eurotunnel also runs a rail freight business through its subsidiary Europorte, which offers a wide range of integrated rail freight services. 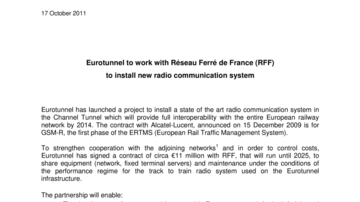