Eurotunnel to set up a services company under European Law: “Eurotunnel SE”

The creation of this new subsidiary should lead to the integration of the existing subsidiaries, enabling Eurotunnel to simplify the legal structure of the Group and to achieve cost savings, while maintaining current commercial teams.

The aim is to win new European customers through improved commercial efficiency and a local marketing approach.

The Channel Tunnel is a vital link to the European transport network infrastructure: of Eurotunnel’s Truck Shuttle service customers, 55% are road hauliers based in France or in the UK and 45% are hauliers based in Northern, Eastern and Southern European countries. 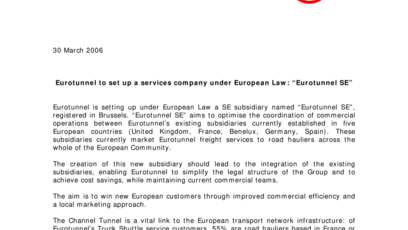 Eurotunnel to set up a services company under European Law: “Eurotunnel SE”