The introduction of GSM-R in the Tunnel took a €48 million investment and six years of detailed project work to achieve. The investment is part of an ongoing strategy of infrastructure development and modernisation and now provides full interoperability with the entire trans-European railway network.

A project on a truly European scale, with the support of French, British, German and Swiss partners, the installation of GSM-R through the Tunnel is the fruit of substantial cooperation between rail and telecommunications operators. Nokia, in charge of the end to end integration of the GSM-R system and the transmission network, is also responsible for the supervision and maintenance of the communications network inside the Tunnel; Siemens supplied and installed the cab radio and driver interface equipment in the Eurotunnel locomotives and SNCF Réseau shared equipment central to the core of its own GSM-R network.

“The inauguration of GSM-R in the Tunnel and on the terminals is the final stage of a 6 year project but also the start of a new era for Eurotunnel, in terms both of railway safety and customer service. With GSM-R, Eurotunnel paves the way for the development of European railway traffic”. 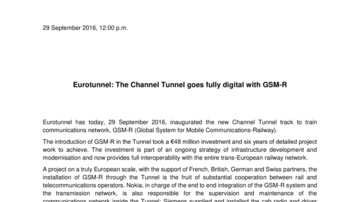