Eurotunnel has installed an accommodation centre for the French military on its terminal in Coquelles. The centre was officially inaugurated today, Tuesday 15 June 2010, by Brigadier-General Michel Bauchet-Canonne, the Military Governor of Lille and Officer in Charge of the Northern defence zone, and Jacques Gounon, Chairman and Chief Executive of Groupe Eurotunnel.

The provision of a permanent military presence of thirty men is in addition to the substantial security resources already provided by Eurotunnel (150 staff, a budget of €14 million in 2009) and is to strengthen security for the thousands of passengers expected in the lead up to the Olympic Games in London in 2012.

Eurotunnel has invested €300,000 to provide the accommodation, with no public subsidy.

“The building of this centre will allow for greater reactivity and speed of response for the men who have, until now, been staying in hotel accommodation in Calais and for whom the distance to the Tunnel was a cause of lost time, expense and fatigue. It will also reduce wear and tear on equipment.”

“This accommodation centre we are providing for the French Army is an advance preparation for the security needs of the Olympic Games in London in 2012. The investment is also a further contribution by Eurotunnel to the administration of the two conceding States”. 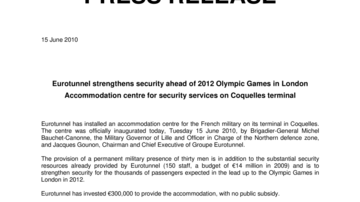