Jean-Louis Raymond, Group Chief Executive, has presented ‘Project DARE’, as approved by the Joint Board of Eurotunnel, to the European Works Council.

Eurotunnel’s commercial strategy is unsuited to the present state of the cross-Channel transport market, which is in decline and highly competitive.

On 7 July Eurotunnel’s management gave its prognosis of the Group’s difficulties. The half year figures published on 26 July, and the traffic figures for the third quarter of 2004, have confirmed that view. In the third quarter the number of cars transported dropped by 5%, the number of trucks by 4% and revenue by around 4%, compared with the same period in 2003.

Beyond periodic fluctuations, a general decline has been in evidence for several years:

At the same time, in the absence of a coherent European policy for the development of rail freight, the capacity available for goods trains is significantly under-used.

Eurotunnel is also confronted with a set of important deadlines: the Stabilisation Period ends in December 2005, the MUC (which guarantees a certain level of revenues from the railway networks) expires at the end of November 2006, and Junior Debt repayments will begin in 2007.

A change of strategy is now vital. This change must start with a radical reorientation of our commercial policies.

In the past few years Eurotunnel has doubled the number of truck shuttles but has suffered from the pricing policies of its competitors. The result is:

However, the service offered by Eurotunnel is particularly well suited to the logistics industry’s need for regularity, punctuality and reliability.

But these advantages are too often treated as a “free insurance” by our competitors; their customers recognise and make good use of the advantages of the fixed link whenever their sea crossing is delayed or cancelled by bad weather or for any other reason. In this way, the ferries themselves benefit from the quality of Eurotunnel’s service.

Eurotunnel will provide a new commercial offering for road hauliers:

This new approach has been discussed with around 50 key customers (representing 70% of revenue in this segment), and has been well received.

The Group has set three main aims: to improve service for Eurotunnel’s regular customers; to increase load factors; and to follow a consistent pricing policy.

At a time when tourism between Great Britain and the continent are on the increase, over the past five years the traffic across the Short Straits has diminished (-15%). The decline has been particularly marked in the day trip segment, which is a significant one for Eurotunnel.

The manifest over-capacity of the passenger shuttles has led to excessive operating costs. In this context, competition with the ferries has forced Eurotunnel into a permanent cycle of promotional activity.

The operational element of Eurotunnel’s recovery strategy incorporates revenues coming from the contract with the railways.

This aspect of project DARE will be developed in association with our partners.

In the meantime, Eurotunnel is pleased to have received, on 22 October, the French Ministry of Transport Safety Certificate for its subsidiary Europorte 2. This gives the Group the opportunity to become the first private operator on the French national network.

The control and reduction of costs is an indispensable element of Eurotunnel’s recovery.

This will be achieved principally through the reduction of costs related to the over capacity in shuttle services.

The further reduction of administrative costs is also under way.

Finally a complete review of sub-contractor and supplier contracts has begun with the objective of:

Conclusion: Project DARE is a company-wide project, an essential first step towards recovery for Eurotunnel

DARE is a global project, elaborated by over 100 professionals from all levels and across Eurotunnel; its ambition is to overcome the major commercial difficulties which the business is subjected to in its two shuttle services.

Nevertheless, the implementation of the project leaves the group with a vulnerable cash flow position at the end of 2005 until the full benefits are seen.

As with all projects, DARE carries risks linked, notably, to possible implementation delays and differences in the hypotheses developed, whether financial or related to the arrangement of contractual conditions concerning the operation of the tunnel.

Clearly, and unfortunately, the implementation will lead to an impact on employment. The validation of the scale of capacity reduction requires substantial further work; it is only when this work is completed that Eurotunnel will enter into the process of consultation with staff and union representatives.

Nevertheless, Project DARE is the essential prerequisite for opening, in the best possible conditions, negotiations with the creditors. The solutions contained within Project DARE form the basis of the three year plan, which must be sent to the Agent Banks, the creditors representatives, by 31 October (in accordance with the Group’s contractual relationship with them).

“Over the past six months we have developed scenarios to enable us to compete more effectively in today’s rapidly changing market. Project DARE identifies a double reorientation of our commercial strategy, an alignment of our transport capacity with demand and a comprehensive programme of cost reduction.

“These measures alone will not be sufficient to safeguard our future beyond the demanding challenge of the next two years. In reality the financial structure of the Group remains fragile and the high financial charges continue to impact on operating results.

“It is therefore necessary to extend project DARE to include the search for solutions that will allow us to reach a sustainable level of debt. Eurotunnel has taken a three step approach: analysis, exploratory discussions and negotiations. The in-depth analysis has been carried out during the past few months.

“Eurotunnel is in regular contact with the Agent Banks; a number of different hypotheses are being developed with a view to putting in place the appropriate financial and legal framework within which negotiations could ultimately be conducted.” 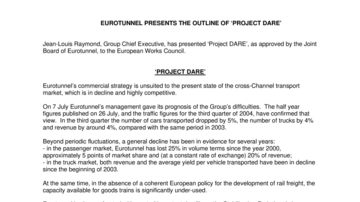