Groupe Eurotunnel SA will open its doors to the public on Saturday 14 and Sunday 15 September and run tours behind the scenes at the Tunnel on both sides of the Channel. This is the first time that the Folkestone installations have been opened up to the public in this way since operations began.

Visitors will for the first time ever be able to go right to the heart of the unique Channel Tunnel infrastructure, walking into the service tunnel, which is normally only used by maintenance crews, and seeing up close how a Shuttle, which is the fastest cross-Channel transport system, works. They will be able to watch the loading of Passenger and Truck Shuttles at the platform and will see first-hand the density of the traffic flows.

The longest undersea tunnel in the world is taking part in this European initiative as a major element in the pan European transport infrastructure, linking, as it does, Great Britain to continental Europe and now being recognized as part of the cultural and tourist heritage of the South East of England.

The 2013 edition of the European Heritage Days celebrates 100 years of heritage protection, Eurotunnel also fits in long term since the concession runs until 2086. It is a unique opportunity to see inside places that are normally closed to the public and often little understood, like the Channel Tunnel. Meeting the men and women who work behind the scenes at the Tunnel will be an occasion to find out more about the knowledge and skill that helps to run the Tunnel on a daily basis: the Channel Tunnel is the most heavily used railway in the world, with nearly 400 trains per day carrying, passengers, cars, coaches, trucks and freight between Folkestone and Coquelles in just 35 minutes, 24 hours a day and 365 days a year.

The 90 minute guided coach tours will show how customers make their way through the transport system starting at check-in, then visiting the platforms, the control centre and the Tunnel itself. 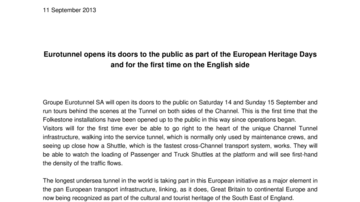