As part of the celebrations to mark the 15th anniversary of the opening of the Channel Tunnel, Eurotunnel has teamed up with The Burlington Beaujolais Run and British sports car maker, Ginetta to deliver another world first.

John took the wheel at Eurotunnel’s Folkestone terminal and, instead of following the signs to the platforms and the Shuttles; he headed for the Service Tunnel entrance and then drove the Ginetta through the 50 kilometre long Service Tunnel to France. This is the first time in the 15 year history of the Channel Tunnel that a production sports car has been driven through the Service Tunnel.

“I am delighted to be able to welcome John Surtees to France as the first man to drive an electric sports car through the Channel Tunnel. This occasion demonstrates that low carbon transport on both road and rail is available now. This friendly competition between the Eurotunnel trains and the Ginetta G50 EV has once again shown how easy the Channel crossing now is

I am also pleased that, even though John is the first man to drive an electric sports car through the Channel Tunnel, the Shuttle Service’s unbeatable strengths of speed, ease and reliability ensured that the cars that travelled by Shuttle got to France faster!

But the really important point is that they all crossed the Channel using power from low carbon sources!”

“This is the longest running charity centred car event in Europe. We have always promoted cutting edge technology and we are continuing that trend with cars like the Aston Martins and the Ginetta 50 EV and with our live “trackaphone”, system which is available through the website. Our links with Eurotunnel for cross-Channel transport mean that we have taken the quickest and most environmentally friendly route to France.” 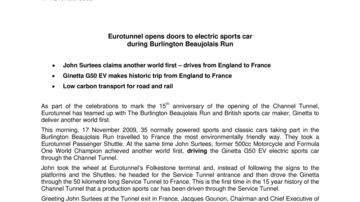