Eurotunnel has presented the taxation arrangements relative to the Safeguard Plan to the authorities in both France and the UK. Following agreements in principle with the two States on these arrangements, Eurotunnel should receive formal agreement from the UK tax authorities around the middle of May, a similar agreement having already been reached in France.

Furthermore, the French Ministry for Economy, Finance and Industry has confirmed that the Eurotunnel SA group tax losses for the periods 2000 to 2002 may be carried forward for an indefinite period for an amount of €890 million (1).

On the basis that the current Exchange Tender Offer is successful, the first use for these tax losses after the implementation of the Safeguard Plan, would enable the generation of savings equal to the amount of the tax charge on the fiscal profits expected in the 2007 accounts.

Jacques Gounon, Chairman and Chief Executive of Eurotunnel said, “All the shareholders who despaired of the States ever taking an interest in Eurotunnel’s situation can now be satisfied. With these carried forward tax losses Eurotunnel will benefit from a significant improvement in its fiscal environment, a clear means of creating added value if the ETO succeeds.”

Eurotunnel manages the infrastructure of the Channel Tunnel and operates accompanied truck shuttle and passenger shuttle (car and coach) services between Folkestone, UK and Coquelles, France. Eurotunnel also earns toll revenue from train operators (Eurostar for rail passengers, and EWS and SNCF for rail freight) which use the Tunnel. Eurotunnel is quoted in London, Paris and Brussels. 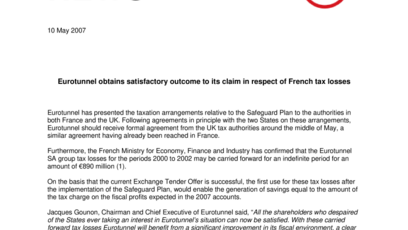