Eurotunnel has topped a recent survey of 26,000 UK respondents carried out by the UK Institute of Customer Service, an independent organisation which twice yearly measures customer satisfaction indices.

With a satisfaction score of 83.0 out of 100 Eurotunnel is ranked first in the transport sector ahead of Virgin Atlantic (81.2), P&O Ferries (80.8), British Airways (79.8) and Easyjet (75.7). Taking all sectors into account Eurotunnel has received one of the highest scores amongst the organisations which were evaluated, and is on a par with First Direct, Marks & Spencer and the RAC, and scored above many other world class brands (Honda, Hilton, IKEA…).

Since 2005 Eurotunnel has unwaveringly placed its customers at the heart of its strategy (80% of those taking the Shuttle transporting passenger vehicles between Folkestone, Kent and Coquelles, Pas-de-Calais are UK based). Our “Focus on Customers” programme has enabled Eurotunnel to expand the number of service initiatives and guarantee a fast and environmentally-friendly journey at the very best price.

Eurotunnel undertakes its own customer satisfaction survey every day, based on a consistent and objective methodology: at the end of September 97% of customers stated that they were satisfied with the service, with 47% “extremely satisfied”, giving the highest score since 2001.

“On the eve of the half-term holiday returns with traffic at peak levels, Eurotunnel’s classification as customer satisfaction leader is a tremendous recognition and incentivises us for the future. The quality of our service, its speed and reliability are absolute priorities for Eurotunnel, and explain how we beat record traffic levels this summer.” 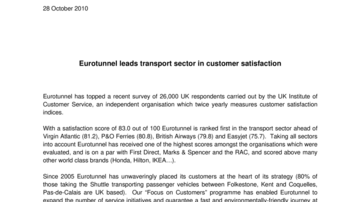