Eurotunnel has been recognised for the seventh consecutive year and has again been honoured with a Green Flag Award® for its Samphire Hoe site, a 30 hectare nature reserve at the foot of the cliffs in Dover, owned by Groupe Eurotunnel.

The Green Flag is conferred by an independent jury to the best green spaces and parks in England and Wales. The quality of the eco-diversity at Samphire Hoe which is home to 200 different plant species (including rare orchids), 200 bird varieties and 30 butterflies as well as being a space open to the general public (with more than 100,000 visitors annually) explains why this site has once again featured among the winners.

Samphire Hoe was created at the beginning of the nineties, during the tunnelling work to build the cross-Channel Fixed Link. Rather than using the 5 million cubic metres of chalk marl extracted from below the Channel as landfill for disused quarries, Eurotunnel preferred to use them to create a space for leisure and bio-diversity, and one which also prevented nearly 500,000 truck journeys. The day-to-day management of this nature reserve has been entrusted to the White Cliffs Countryside Partnership, which receives the support of many local volunteers.

“During these challenging financial times it is heartening that efforts are being made all year round to improve the management of parks and natural environments in the UK. The importance of their preservation and the challenges which this represents for our communities are increasing. We must ensure that our endeavours remain at the same level.”

“Samphire Hoe is an example of Eurotunnel’s commitment to the environment, and we are proud that this has been recognised over the past seven years. At the very beginning we made a promise to limit the impact of the Channel Tunnel on the natural landscape in Kent and the Pas-de Calais. The Green Flag demonstrates that this promise has been kept. Our efforts in this area continue every day: further proof is the recent Carbon Trust Standard re-certification, which shows that Eurotunnel has reduced its greenhouse gas emissions by 55.5% since 2006.” 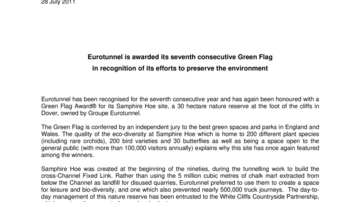