Eurotunnel and IN Groupe (formerly Imprimerie Nationale) have today signed, in the presence of Xavier Bertrand, President of the Hauts-de-France region, a partnership to equip Eurotunnel’s terminals with SAS PARAFE (E-Gate) technology, as used at airports, but this time implemented at the vital road and rail border between the UK and France.

Eurotunnel, which transports more than eleven million passengers each year between Coquelles and Folkestone, is actively progressing its preparations for Brexit.

It is the result of collective work carried out over several months between Eurotunnel and IN Groupe, under the authority of the Minister of the Interior in France. This hi-tech investment financed by Eurotunnel will make it easier for passengers holding biometric passports to cross the border.

The use of this technology contributes to the modernisation of operational border management and the evolution towards intelligent management. It also makes possible the dual objective of facilitating and speeding up border crossings which, in the context of increasing passenger flow and an increase in the quality of border checks which provides greater certainty on travellers’ identities and the rights associated with these.

For the first phase of this project, the passengers on the 51,000 coaches which travel each every year, mostly tourists, will be the first to use the facial recognition PARAFE gates from the beginning of April. In addition, two sets of 9 PARAFE gates (5 for departures, 4 for arrivals) with new generation facial recognition will be installed in France and the UK and be available for the relevant authorities to speed up and secure the border crossing.

Later phases will focus on equipment for Eurotunnel’s Flexiplus services and then a broader roll out.

Backed by a high-tech solution that has already proved its worth in French and international airports, IN Groupe, a global specialist in corporate identity, has partnered with Gunnebo, the world leader in security solution and services, to deploy its latest generation E-Gates to equip the land border. By reinforcing security while improving the flow of travellers at borders, both on board as well as on arrival, they contribute to improving passenger satisfaction.

“In the context of Brexit, Eurotunnel and IN Groupe have taken the lead regarding the important issues of safety and fluidity. This technology does not replace people but allows us to face new challenges and to save time. The Hauts-de-France region is ready, thanks to Imprimerie Nationale technology which will help passengers. It is tried and tested technology: it provides safety and comfort.”

Didier Trutt, Chairman and Chief Executive Officer of IN Groupe.

“With our innovative border control solutions, we provide a powerful and immediately operational response to the security challenges of each state. Today, we are proud to equip the first non-airport border crossing point in Europe”

“By becoming the first terminal on the Short Strait to be equipped with facial biometric recognition technology, Eurotunnel again demonstrates its mission to enable easier and faster travel for its customers.”

Getlink SE (Euronext Paris and London: GET) manages, through its subsidiary Eurotunnel, the infrastructure of the Channel Tunnel and operates truck and passenger Shuttle Services (cars and coaches) between Folkestone (UK) and Calais (France). Eurotunnel is the concession holder and operator of the Channel Tunnel, the fastest, most reliable, easiest and most environmentally friendly way across the English Channel until 2086. In 24 years, nearly 430 million people and 86 million vehicles have travelled through the Channel Tunnel. This unique land link has become a vital link between the continent and the United Kingdom. Getlink also offers a rail freight business through its subsidiary Europorte, which offers a wide range of integrated rail services, as well as an electrical interconnection through its subsidiary ElecLink. . https://www.getlinkgroup.com

A partner of the French state for nearly 500 years, IN Groupe offers identity solutions and secure digital services at the cutting edge of technology, electronics and biometrics. From components to services to titles and interoperable systems, as a global specialist in identity and secure digital services, IN Group is there every day to make life easier for everyone. Accompany States in the exercise of their sovereignty. Protect the identity of citizens. Preserve the integrity of companies. Whatever the issue, IN Groupe, a company of digital sovereignty, contributes to asserting for everyone a fundamental right: the right to be yourself.

IN Groupe is the new brand of the Imprimerie Nationale Group 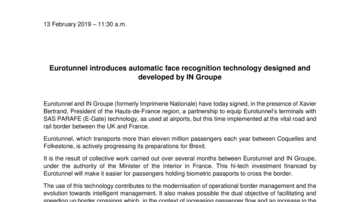