Eurotunnel: improved results in the first half of 2005

"Eurotunnel has accelerated improvements in its operational performance. Increased revenue in our core shuttle business has been achieved within the framework of a new marketing strategy based on our key benefits: frequency, speed, and reliability.

“We expect to consolidate the 3% reduction in operating costs in the second half. This will be achieved by more closely aligning capacity with demand, and by further reductions in staff costs as the first voluntary redundancies take effect.

“I would like to acknowledge the hard work and commitment of our staff and the sense of responsibility shown by the unions, all of whom are taking on this phase of reconstruction with the firm intention of saving Eurotunnel.

“In accordance with our timetable for the planned financial restructuring, we presented a business plan to our creditors in advance of the 30 June deadline, and our initial reflections on the debt restructuring on 13 July. “

“Negotiations with the Ad-hoc Committee and two other creditor committees continued throughout the summer. These negotiations remain confidential, although we hope to be able to issue a progress by the end of October at the latest."

FINANCIAL RESULT FOR THE SIX MONTHS TO 30 JUNE 2005

With effect from 1 January 2005, Eurotunnel is required to apply International Financial Reporting Standards (IFRSs) when preparing its accounts. The accounting principles now being applied by Eurotunnel, and certain departures from full compliance with IFRSs, are described in note 2, and the impact of new accounting principles is illustrated in note 8 to the interim combined accounts which are available on the internet site www.eurotunnel.com.

Included in annexe 1 of this press release is a summary of the principal changes to Eurotunnel’s combined accounts resulting from the introduction of IFRS.

For the half year ended 30 June 2005, Eurotunnel is applying the recommendation of the CNC 2004-R02 dated 27 October 2004 for the presentational format for the combined income statement and cash flow: this presentation may differ to reflect standards in force at the time of preparing the financial statements for the year ending 31 December 2005.

The comparative figures for 30 June 2004 in the table below have been restated to reflect the adoption of the new accounting principles, and are also recalculated using the exchange rate applicable for the preparation of the 2005 combined interim income statement of £1=€1.468 in order to assist comparison with the 2005 figures. The commentary following the table below discusses 2005 performance in comparison with 2004 equivalents translated at the constant exchange rate. 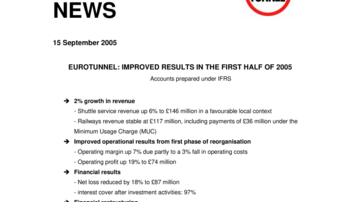 EUROTUNNEL: IMPROVED RESULTS IN THE FIRST HALF OF 2005