Eurotunnel Group defends the logic of its maritime activity MyFerryLink

The Competition Commission has stated in its Provisional Findings that Groupe Eurotunnel’s new maritime proposition could lead to a reduction in competition across the Channel and has provisionally concluded that it will be necessary that MyFerryLink is withdrawn from the market.

Groupe Eurotunnel contests this analysis and has today sent its own observations, which are summarized below, to the Competition Commission. 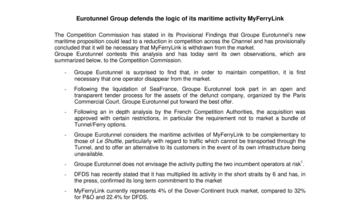 Eurotunnel Group defends the logic of its maritime activity MyFerryLink