Eurotunnel is pleased to announce the decision of the French Transport Minister and Secretary of State for Transport to grant a rail freight operator's licence to Europorte 2, a subsidiary company created to develop new traction services.

This is the first licence to be granted in France since the Trans-European rail freight market was opened to competition on 15 March 2003. This makes it possible for the company to develop a point-to-point traction service form the start of next year. It will now continue to set up this undertaking within the appropriate framework, including the acquisition of safety certificates and train paths on each of the networks for the new service.

The first route will connect Italy to the UK. From early-2005, Europorte 2 will haul trains between Basle, Switzerland and the economic centres of the UK on a rail freight corridor linking Milan, Basle, Metz (for the connections towards Germany and Eastern Europe), Dourges (close to Lille) and the Midlands.

Eurotunnel envisages operating five trains per week in each direction rising to 30 trains per week by 2008. There is already significant interest from potential customers.

This new rail freight service will provide a competitive alternative to North Sea shipment by reducing transit times by one day. It will also produce significant environmental benefits by shifting freight from road to rail. Eurotunnel is actively exploring other rail freight route opportunities.

In line with Eurotunnel's strategy to significantly increase the volume of rail freight using the Channel Tunnel, the company is also finalising plans for an intermodal freight terminal that will provide the only access to UK markets for larger continental gauge rail traffic. FIRST (Folkestone International Rail Freight Services Terminal), designed to be operational in mid-2005, will be built alongside Eurotunnel's existing tracks on its Folkestone site. This facility will raise the current barriers to intermodal rail traffic coming from the Continent and will be the first step towards the use of the CTRL for rail freight. The new terminal will be open to access by all rail freight operators.

Eurotunnel estimates that the new terminal will initially be able to accommodate four per trains per day. The Channel Tunnel allows the passage of different forms of rail freight transport, including unaccompanied trailers, high-cube swapbodies and containers on conventional flat wagons.

"Our aim is to open the cross-Channel market for rail freight. The award of this licence and the construction of an intermodal terminal in Folkestone are two stages in delivering our strategy to develop cross-Channel rail freight traffic. Europorte 2 will deliver a high quality service, and be fully transparent with respect to other operators."

"I delighted by this decision. We will now be able to proceed with the active phase of our project" 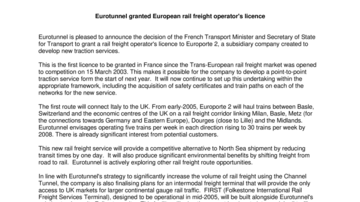