Between 00:30 and 04:30 on Sunday 15 January, Eurotunnel held its 22nd annual binational safety exercise, BINAT 22. Emergency services from both Britain and France were mobilised: firefighters, paramedics, police…. The Lead Nation in this year’s exercise was France.

A fullscale, real-time exercise, BINAT is run at least once each year to test the planning and preparedness of the French and British emergency services in the event of an accident underground in the Channel Tunnel. No other European infrastructure manager organises an exercise of this scale. Eurotunnel estimates that each BINAT exercise costs approximately €200,000.

The 2012 edition simulated a fire on board a truck being carried on a Shuttle towards the UK, the controlled stop, the evacuation of the truck drivers, in just a few moments, and the operation of a SAFE station.

Since the autumn of 2011 the Channel Tunnel has been equipped with four underground fire fighting stations, known as SAFE stations. A major safety innovation, the SAFE stations are capable of detecting and pin-pointing a hot-spot on a Freight Shuttle and, once the shuttle is brought to a standstill, of dispersing a targeted water mist which limits fire propagation by preventing oxygen access and helps to extinguish it. This automated system in turn facilitates the access of firefighters. The SAFE stations are 870 metres long and are situated 28km and 42km from the UK portal in both running Tunnels.

“Eurotunnel considers the safety of its customers, staff and the goods transported through the Channel Tunnel to be an absolute priority. The construction of the four SAFE stations, whose effectiveness has been demonstrated during this 22nd BINAT, is proof of our ability to innovate and of our desire to constantly improve the quality of our service.” 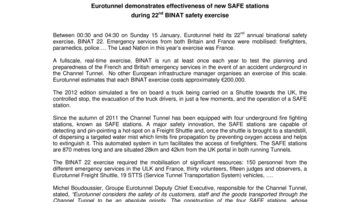