The Paris Commercial Court decided, on Monday 11 June, to accept the offer made by Eurotunnel following the administration of the SeaFrance group, announced on January 9 2012.

Groupe Eurotunnel offered €65 million to acquire three ships, The Berlioz , The Rodin and The Nord-Pas-de -Calais, along with their related assets. The acquisition will be made via an ad-hoc financial vehicle owned by the group and named Eurotransmanche. It will be open to the local authorities and will lease the ferries to an operating company. This company, independent of Eurotunnel, will be able to create 500 jobs in the Calais region and about a hundred in the UK.

The ferries will need a technical overhaul before being brought into commercial service, as SeaFrance was unable to complete necessary maintenance work before being placed into administration.

“I am delighted that the pragmatic approach taken by Eurotunnel has convinced the Commercial Court. This will aid economic development and will further support the transport of people and goods between the continent and Great Britain”. 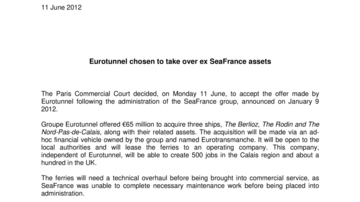