Eurotunnel celebrates the 30th Anniversary of the Treaty of Canterbury

Eurotunnel today celebrates the 30th Anniversary of the Treaty of Canterbury, the document which set in motion the creation of one of the greatest engineering feats of the 20th century, the Channel Tunnel.

As early as 1982, Pierre Mauroy, Prime Minister in the government of François Mitterrand and a major force in the development of the project, had brought a new drive to the discussions regarding a connection between the two signatories to the Entente Cordiale. The Treaty of Canterbury, which was signed thirty years ago today, in the Chapter House at Canterbury Cathedral, by Foreign Secretary Geoffrey Howe and his French counterpart Roland Dumas, in the presence of Margaret Thatcher and François Mitterrand, authorised the construction of the Fixed Link beneath the Channel and set the terms for its construction and operation.

Those 32 miles have transformed Europe forever and have become a symbol of extraordinary determination and political courage and also of the capacity that men and women of vision to transform the world.

Today more than 366 million people and 73 million vehicles have been through the Channel Tunnel.

“Beyond the symbolic nature of this anniversary, we should also recognise the quality of thought and drafting that went into the Treaty of Canterbury which was both visionary and pragmatic and which underlines its importance 30 years later”. 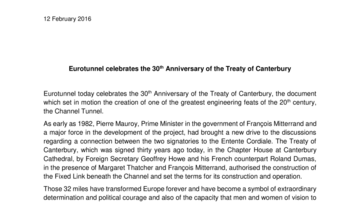 Eurotunnel celebrates the 30th Anniversary of the Treaty of Canterbury