Eurotunnel is delighted that its Samphire Hoe nature reserve has been honoured with the prestigious Green Flag Award® for a ninth consecutive year, in recognition of the site’s inclusive public access and the high quality of its conservation and community involvement.

An inspiring nature reserve, Samphire Hoe was reclaimed from the sea using almost 5 million cubic metres of chalk marl extracted from below the Channel during construction of the Tunnel and transformed into an award winning site enabling an impressive development of biodiversity.

Owned by Eurotunnel, this stunning 30-hectare nature reserve at the foot of the magnificent Shakespeare Cliff attracts 100,000 visitors a year. It is home to some 230 different plant species (including rare orchids), 30 butterfly and 150 moth species and 213 bird species.

The day-to-day management of this natural space has been entrusted to the White Cliffs Countryside Partnership, which receives the support of many volunteers from Kent. The Hoe is open to the public every day from 7am until dusk.

“Green Flag awards are not easy to achieve so it is fantastic news that Samphire Hoe has won the award for nine consecutive years. This is testament to the hard work and commitment of staff and volunteers and Eurotunnel's support for this nationally important site.”

“We are delighted that the Eurotunnel Group’s commitment to protecting the environment is being recognised. At Samphire Hoe, we have kept to our original promise: the construction and managing of the Channel Tunnel has had as little as possible impact on the environment. Thanks to the rangers and the volunteers who give up their time freely and passionately to provide a well-managed and valuable sustainable green space, Samphire Hoe is a shining example of Eurotunnel’s continued biodiversity development and environmental protection activity” 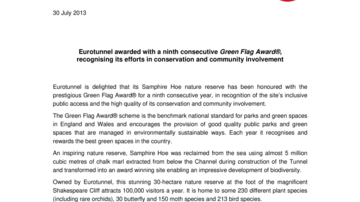