Groupe Eurotunnel, the world leader in piggy back transport, has appointed Nicolas Brossier as Director of Rolling Stock, the department responsible for the real time and preventative maintenance of its fleet of Shuttles and for research and development. He will report to Concession Chief Operating Officer, Michel Boudoussier.

Rolling stock is one of the key elements of Eurotunnel’s transport system, employing 400 technicians, working in the longest maintenance buildings in Europe and looking after the 24 Shuttles to ensure their availability in the intense operating environment 365 days a year.

Each Shuttle is four times the length of a standard high speed train and carries up to 190 cars. The Rolling Stock department is developing in line with the increase and concentration in cross-Channel traffic over the coming years.

Nicolas Brossier, 42, will take up his role on 2 January 2014. He is a graduate of Supélec and holds an Executive MBA from HEC. He began his career in 1993 with Technip, where he was responsible for elements of gas and petrochemicals projects until 1999. He then moved to Cegelec Systèmes as procurement manager. In 2001 he joined Alstom Transport where he was successively Project Leader for the Lyon Tramway, Director of Maintenance for the Dublin Tramway, between 2003 and 2007 and then Director of Railway Infrastructure Maintenance before being promoted to the role of Commercial Director for Railway Infrastructure, France, in January 2013. 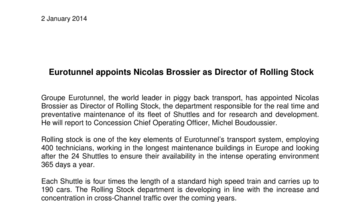