Eurotunnel and the Conseil Général of the Pas-de-Calais, partners in promoting the region and its tourist development

The Conseil général of the Pas-de-Calais and Groupe Eurotunnel today, in Coquelles, signed a Partnership agreement which joins the efforts of the council and the company in promoting the area of the department, its progress in the field of sustainable development and the encouragement of cross-Channel travel.

Thirty-six concrete projects in the areas of the economy, tourism and sport are listed within the agreement (see Annex). They support the following, broader objectives:

Among the projects led by the partners are, for example: the inclusion of the Dover Straits in Unesco’s world heritage list, the celebration in 2009 of the anniversary of Blériot and cross-Channel travel, the creation of a tourist destination at Sangatte, the building of facilities in order to host sports delegations participating in the 2012 Games and organising their cross-Channel travel.

“With strong development know-how, Eurotunnel is working with the 2012 Games in mind towards the emergence of a tourist destination with international visibility on its doorstep, linking sustainable development and the creation of jobs. The signing of the partnership agreement with the Conseil général is a major step in the advancement of this project.”

Dominique Dupilet, Chairman of the Conseil général of the Pas-de-Calais, said:

“This voluntary agreement initiative reflects the spirit of partnership, a willingness to open up, the affirmation of a department active in its development and seizing all opportunities to make the Pas-de-Calais a department that is united, innovative and lasting.” 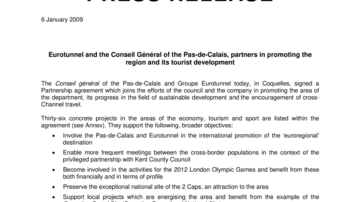 Eurotunnel and the Conseil Général of the Pas-de-Calais, partners in promoting the region and its tourist development