Following the agreement to apply the European Technical Specifications for Interoperability to freight trains travelling through the Channel Tunnel, tests were carried out overnight on 25-26 January 2013 with a latest generation Siemens Vectron locomotive.

The Vectron is the first locomotive to gain certification under TSI, HS and RST in Europe. It is therefore capable of hauling traffic directly from the continent to the UK. The tests were to prove its compatibility with the systems and safety rules in the Channel Tunnel.

For the test, the Vectron loco, in standard configuration and hauling wagons with a total weight of 1,350 tonnes, entered the Tunnel via the French portal at 22:42 and completed a series of traction, braking and pantograph tests. Equipped with four axles, instead of the six on the Class 92, which is currently used in the Tunnel, the Vectron exited at Folkestone before setting back to France for a second phase of tests, which was completed without difficulty around 06:00 am.

This series of tests is in line with Eurotunnel’s ambition to encourage the development of “normal” rail freight between the UK and continental Europe, that is to say without the need to use the very specific Class 92 locomotives.

The successful tests, which are a further stage in the story of the Vectron, demonstrate how Siemens has been able to react to the requirements of interoperability with its new generation of ERTMS compatible locomotives, and is evidence of the role Eurotunnel is playing in the development of rail in Europe.

“The approval of new rolling stock is the vital counterpart to the open access model put in place by Eurotunnel. I am delighted that our cooperation with Siemens will open the way to new international rail freight flows, which will in turn, significantly reduce C0² emissions”.

“We are very pleased to have been able to demonstrate the exceptional capabilities of the Vectron. In keeping with the Vectron slogan, ‘Creating corridors’, we have been able to show that it is possible to operate through the Channel Tunnel, in a reliable and safe manner, using just a standard loco”.

Groupe Eurotunnel (Euronext Paris: GET and London Stock Exchange: GETS) manages the infrastructure of the Channel Tunnel and operates accompanied truck shuttle and passenger shuttle (car and coach) services between Folkestone, UK and Calais, France. Eurotunnel holds the concession until 2086 to operate the Channel Tunnel, the fastest, most reliable, easiest and most environmentally friendly way to cross the Channel. In 18 years, nearly 284 million people have used the Channel Tunnel. This unique land crossing has become a vital link between the continent and the United Kingdom. Eurotunnel also runs a rail freight business through its subsidiary Europorte, which offers a wide range of integrated rail freight services.

The first private French rail operator to have obtained, in 2004, a licence authorising the development of rail services throughout the European Union, this rail freight subsidiary of the Eurotunnel Group is the 3rd largest operator within the French and British rail network. With more than 1000 employees in France, Europorte provides tailor-made solutions for industrial operators, offering an integrated range of services covering all freight fields: from national and international haulage to logistics, from local services to management of branch lines, including the activities of a local railway operator. www.europorte.com

The Siemens Rail Systems Division (Berlin, Germany) is an international leader in providing rolling stock and related services. Its portfolio covers the full range of vehicles - from railroad cars to metros and locomotives to trams and light-rail vehicles. The Division combines competence in the areas of local, long-distance, and logistical transport to offer comprehensive expertise for environmentally friendly, efficient, and reliable rail vehicles, which are already in use in more than 40 countries. For more information, visit 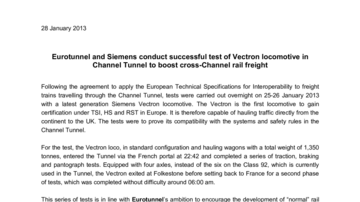