The report shows for the first time the detail of the traffic flows managed by Eurotunnel between the UK and its 5 principal European partners (Germany, France, the Netherlands, Spain and Ireland).

The total amount of trade passing through the Tunnel each year has increased to almost €140 billion, with imports and exports being almost equal. This represents hundreds of thousands of jobs on both sides of the Channel and this value has increased significantly over the last two years.

In addition, millions of passengers also use the Tunnel, both with their cars and by train.

The detailed analysis of the different sectoral flows shows that it is the speed and ease of passage from one side of the Channel to the other that is most important for both industry and consumers.

“The Channel Tunnel is more than just a vital link between Great Britain and continental Europe, it is a physical connection, a vector for development and a creator of value. Maintaining this dynamic must remain a priority for the whole of Europe, to the benefit of all its people”.

“I believe that the report offers a very solid basis for understanding the contribution of the Channel Tunnel to the economies of Europe on both sides of the English Channel.”

Professor L Alan Winters, Director of the UK Trade Policy Observatory, and Professor of Economics at the University of Sussex

“Brexit may well represent a significant change in the economic and political relationship between the UK and the EU, but the Channel Tunnel will retain a critical role as a facilitator of economic and cultural links between the two. Sustaining current traffic flows will ensure the growth achieved to date continues.”

The report has been formally launched at a workshop in Brussels this afternoon with European Parliamentarians and policymakers.

EU countries and their use of the Channel Tunnel

More people from the UK visit France than from any other country – 12 million, accounting for 15.4 per cent of non-domestic tourists.

The Channel Tunnel also supports exports to the UK from the expanding French brewing industry. The UK received 15 per cent of French beer exports in 2016 (€42m).

In 2016, France was the largest European importer (€5.8bn) and exporter (€4bn) of postal and courier freight via the Channel Tunnel.

The Channel Tunnel carries €4.3bn of value in automotive parts between the UK and Germany.

Most notably, it facilitates the rapid transport of components necessary for the just-in-time and just-in-sequence production process employed by the industry.

Germany is home to nearly a fifth of all European automobile assembly and engine production plants, the largest proportion in a single country. The UK is home to the second highest number. Many of these plants form part of an interconnected and interdependent supply chain network across Europe and the world.

The fixed link plays a critical role in supporting the automotive trading relationship between the UK and Germany. The sector – which supports 818,000 German jobs – is dependent on the UK as a sales market but also as host to multiple elements of the production line and supply chain, for example in the West Midlands and North East of England.

The Channel Tunnel supported €7.8bn of trade between the UK and Spain in 2016 – approximately 21 per cent of all Spanish trade with the UK.

The UK is Spain’s third largest export market for fresh produce (13 per cent). Due to the perishability and time-sensitive nature of fresh produce, time is of particular importance when considering long distance transport options. As a result, the sector is heavily reliant on the Channel Tunnel to transport its produce to the UK.

34.4 per cent of UK exports to Spain go via the Channel Tunnel.

In 2016, the Tunnel transported €193m of fresh produce from Spain to the UK and almost half of the UK’s citrus fruit imports are sourced here.

Belgium and the Netherlands

The Netherlands’ flower export market is particularly reliant on the Channel Tunnel. The industry as a whole exports €5.6bn of flowers, plants and bulbs of which the UK is the second largest market. In 2016, exports of flowers, such as sales of Dutch tulips, roses and chrysanthemums to British supermarkets reached €0.9bn.

The Channel Tunnel has provided a crucial land bridge for Irish exports to access mainland Europe via the UK. Key exports include medicines and pharma products, organic chemicals, essential oils and perfume materials.

Just over 50 per cent of Ireland’s exports in 2016 went to other European countries, with

Given the high value nature of the goods, Pharma-chem companies value the high security offered by the Channel Tunnel. Customers note that the ability to transport refrigerated freight, the significantly lower embarking and disembarking times than alternative methods, and the protection from adverse weather conditions are all reasons for using the Channel Tunnel.

In 2017, EY were commissioned to undertake analysis for this report, Economic Footprint of the Channel Tunnel in the EU. The report assesses the economic value of trade travelling through the Channel Tunnel between the UK and EU countries.

This report is an extension of EY’s 2016 analysis, The Economic Footprint of the Channel Tunnel, which focused on the role that the Channel Tunnel plays in supporting trade and economic activity in the UK. The findings of the earlier report, which drew on a combination of primary and secondary research, have been used to inform this analysis where appropriate, along with updated data.

As part of this study, EY engaged with Channel Tunnel’s customers across a number of countries and sectors. This provided insight into the role the Channel Tunnel plays within their operating model, why they choose the Channel Tunnel as a method for transporting their goods as opposed to alternatives available, and the potential future challenges to their trading relationship with the EU, post-Brexit.

EY’s analysis covers trade by both volume and value and all figures are show in 2016 Euro prices, unless otherwise stated.

Additionally, the report sets out key findings from the analysis including:

The UK is the destination of 7 per cent of total EU27 exports (by value), supporting activity in a number of regional and national economies across Europe. The Channel Tunnel is integral to this, facilitating 26 per cent of UK-EU trade.

In line with best practice, the analysis contained in this report and the methodology and approach used has undergone a peer review by Professor L. Alan Winters, Director of the UK Trade Policy Observatory, and Professor of Economics at the University of Sussex.

Eurotunnel operates the cross-Channel Fixed Link, which is the fastest, most frequent and most environmentally friendly way of crossing the Short Straits. This rolling motorway, which has become a vital link for Europe in terms of industry, tourism and culture alike, is used by 2.6 million cars, 1.6m trucks and 21 million people every year. High-speed passenger trains and rail freight trains also run through the Channel Tunnel. 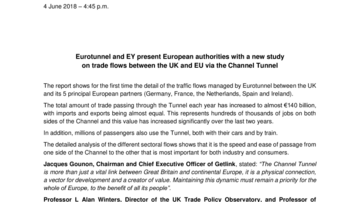