The Railway Usage Contract1 (RUC) dated 29 July 1987 and signed by Eurotunnel and the Railway networks (SNCF and British Railways Board) is, alongside the Treaty of Canterbury, one of the founding documents for the cross-Channel Fixed Link. This contract defines the access conditions (particularly the access charges) for high-speed and rail freight trains.

Eurotunnel and Eurostar collaborated to complete a RUC application agreement to determine the contributions to the operating, maintenance and renewals costs (OMRC) of the cross-Channel Fixed Link railway infrastructure for the years 2015 to 2019 inclusive. In accordance with European Railway Directives, this agreement was negotiated under the auspices of the Intergovernmental Commission, in its role as Railway Regulator2, to ensure compliance with transparency, equality and non-discrimination goals.

The agreement was formally signed on 15 June 2015 by the signatories of the RUC and is in line with the similar 2006 agreement. It introduces a new variable element related to operating performance, meant to focus on quality of service offered by Eurotunnel to the rail operators and, as a consequence, to passengers.

Written in the spirit of Open Access, this agreement caters for the participation of all passenger train operators, Eurostar and new entrants alike.

“This Agreement will make a positive contribution to focused efforts on the quality of service offered by Eurotunnel, and will foster the further development of Eurostar traffic.” 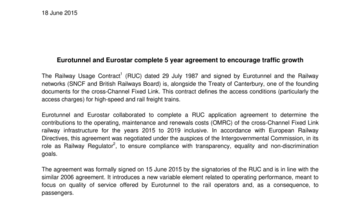