With Eurotunnel having obtained, in July 2012, that the Technical Specifications for interoperability should be applicable to freight trains travelling through the Channel Tunnel, tests on the new generation Alstom Prima II locomotives were conducted overnight between 29 and 30 September in order to check compatibility with Channel Tunnel systems and safety standards.

For this first test, a Prima II locomotive, in standard configuration and hauling wagons with a total weight of 950 tonnes, entered the Tunnel via the French portal at 22:20 before conducting a series of traction, brake and pantograph tests. Exiting the Tunnel at Folkestone at approximately 03:00, the train then departed for a second series of tests on the return journey to France, ending at approximately 06:00.

The tests are in line with Eurotunnel’s ambition to enable the development of standard rail freight services between the UK and continental Europe, that is to say, without the obligation to use the specialised Class 92 locomotives.

The successful test programme, which is a new step in the Prima II story, shows the flexibility Alstom has demonstrated to adapt to the serious issue of interoperability for freight with this new generation of locomotives which is compatible with both ERTMS and ETCS and able to run using four different power supplies (25kV, 15kV, 1500V and 3,000V). Prima II can run along all the European freight corridors.

“Gaining authorisation for new rolling stock is an essential part in the development of the Open Access approach implemented by Eurotunnel. I am very pleased that our close cooperation with Alstom is opening up new avenues for freight whilst at the same time significantly reducing CO2 emission”.

“We are very pleased with the results of these tests which open up new and promising perspectives for European rail freight and are proof of Alstom's active support for the sector. They form part of the framework of lasting partnership that we promote every day with all our customers and with Eurotunnel in particular.”

Groupe Eurotunnel (Euronext Paris: GET and London Stock Exchange: GETS) manages the infrastructure of the Channel Tunnel and operates accompanied truck shuttle and passenger shuttle (car and coach) services between Folkestone, UK and Calais, France. Eurotunnel holds the concession until 2086 to operate the Channel Tunnel, the fastest, most reliable, easiest and most environmentally friendly way to cross the Channel. In 18 years, nearly 284 million people have used the Channel Tunnel. This unique land crossing has become a vital link between the continent and the United Kingdom. Eurotunnel also runs a rail freight business through its subsidiary Europorte, which offers a wide range of integrated rail freight services.

The first private French rail operator to have obtained, in 2004, a licence authorising the development of rail services throughout the European Union, this rail freight subsidiary of the Eurotunnel Group is the 3rd largest operator within the French and British rail network. With more than 1000 employees in France, Europorte provides tailor-made solutions for industrial operators, offering an integrated range of services covering all freight fields: from national and international haulage to logistics, from local services to management of branch lines, including the activities of a local railway operator.

Alstom Transport develops and markets the broadest range of systems and services available in the railway sector. Alstom Transport manages all aspects of transport systems, including rolling stock, signaling and infrastructure and offers its customers turnkey solutions. Alstom Transport had revenues of €5.2 billion in 2011-2012. Alstom Transport is present in more than 60 countries and has 24,700 employees.

About the Prima II locomotive

Thanks to its Onix chain drive, the Prima II locomotive is a modern machine generating 6.4 MW in power, enabling it to meet the traction needs of freight and passenger train operators. It features an independent traction system for each axle: in the event of a malfunction on one axle, the locomotive is able to perform at 75% in the case of a Bo-Bo, considerably reducing risks and immobilisation costs.

Throughout its lifecycle, maintenance is facilitated thanks to the standardisation of its structure and main components, to the easy access to its main equipment features distributed on either side of a large central corridor, and to the TrainTracer remote diagnosis system. As a result, Prima II can ensure one of the best availability rates on the market, as well as high residual value thanks to its modularity and versatility (easy to reconfigure according to the requirements of the various operators). It provides the drivers with the best possible working conditions, including increased protection in the event of a collision. It features a European “EUDD+” control panel, and living quarters specifically designed to host two drivers. The dashboard is ergonomic and easy to use. The cabin’s perfect soundproofing reduces noise levels. For optimal comfort, the cabin is air-conditioned.

Morocco’s national operator ONCF uses 20 Prima II locomotives, intended to tow freight trains at a speed of 160 km/h. On another note, a wide-gauge version, using a number of common sub-systems, is currently being manufactured for Kazakhstan and for the Russian market. 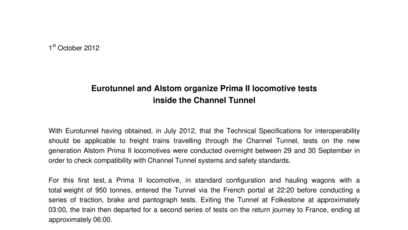