Europorte France, the rail freight subsidiary of the Eurotunnel Group, starts a new contract between the Vynova1 plants located in Tessenderlo (Belgium) and Mazingarbe (France) for the coming two years. This flow is based on existing excellent cooperation between Europorte France and the freight forwarder Forwardis.

Under the new contract which started on 1 April 2017, Europorte France provides 5 to 6 trains per week transporting raw materials produced in Tessenderlo and used for the PVC production in Mazingarbe. During the tender process, Europorte France was selected by Forwardis and Vynova as it is the only railway company to propose a seamless transport schedule end-to-end thanks to the use of modern interoperable E4000 TBL1+ locomotives, on both French and Belgian networks, and to its international know-how.

Pascal Sainson, Chairman of Europorte, stated: “Signing this contract not only underlines Europorte France's ability to meet the expectations of its customers while optimizing its fleet of locomotives, but also underlines the expertise of its staff who operate on both national networks. Europorte is proud to demonstrate its capacity to develop new markets with high-performance potential.” 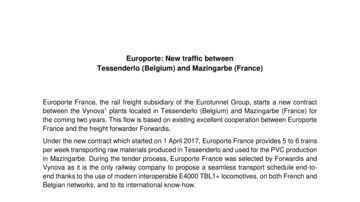